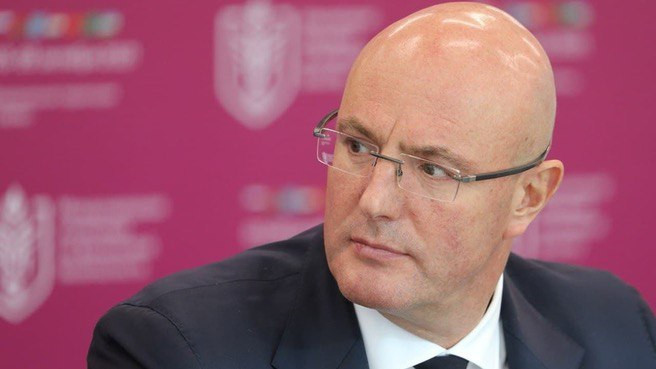 Russia's Deputy Prime Minister Dmitry Chernyshenko has claimed International Olympic Committee (IOC) President Thomas Bach has "his own fictional narrative on the feelings of our athletes" after he criticised the treatment of skater Kamila Valieva by her entourage following her failure to win an Olympic medal in Beijing last night.

Bach offered his assessment at his final press conference in the Chinese capital, revealing that he had watched the final of the women's singles on television.

Valieva had been at the centre of controversy at Winter Olympic Games since insidethegames revealed the 15-year-old failed a drugs test in December.

The teenager, cleared to compete by the Court of Arbitration for Sport, who refused an appeal from the IOC to suspend her, was the favourite to win the gold medal but a series of errors during the free programme saw her slip out of the medals to finish fourth.

Bach claimed he was alarmed by how her coach Eteri Tutberidze greeted her as she came off the ice, something he described as "a tremendous coldness".

Bach added, "rather than try to help her, you could feel this chilling atmosphere".

Bach's comments have been condemned in Russia, with Chernyshenko delivering a stinging rebuke.

"We are deeply disappointed to see an IOC President weave his own fictional narrative on the feelings of our athletes, and then present these publicly as the voice of the IOC," Chernyshenko, who had been the President and chief executive of the 2014 Winter Olympics in Sochi, told insidethegames.

"This is frankly inappropriate and wrong.

"Everyone recognises the Olympics as the pinnacle of professional sport, and every single athlete bears the hopes and dreams of their entire nation for their success.

"That is a known pressure, and it is also what drives them forward, with a fighting spirit.

"Win or lose we know our athletes are world-beating, and they do too."

Russia still claimed the gold and silver medals in the event thanks to Anna Shcherbakova and Alexandra Trusova, who are also both coached by Tutberidze.

The 47-year-old had also coached Alina Zagitova to the Olympic title at Pyeongchang 2018 but is renowned for her tough methods and the relative short careers of the skaters she works with.

Evgenia Medvedeva, the silver medallist at Pyeongchang 2018, retired in December due to a chronic back injury.

"The latest statement by the head of the IOC regarding the cold towards Valieva by the coaches of the Tutberidze group is extremely perplexing," he told Russia's official state news agency TASS.

Gorshkov, the 1976 Olympic ice dance gold medallist and a six-time world champion, was by the ice when Valieva stepped off following her performance and claimed that everyone rallied round the youngster.

"Everyone who was next to Kamila at that moment - and her entourage, and our entire team - did everything possible to support her in this exceptionally difficult moment," he said.

"It is strange to hear that the same structures that, violating the rules and laws, did everything to morally crush Kamila, are now trying to shift the blame from a sick head to a healthy one, blaming the Tutberidze team for everything.

"Everything that happened at these Games around Kamila and our coaching staff by a number of officials and media representatives can only be called bullying.

"Moreover, individual statements only escalated the already explosive atmosphere around Kamila and our entire team.

"Unfortunately, this directly affected her performance.

"I can say that being at the Olympic Games in recent days has become an unbearable test for a 15-year-old girl."

Valieva has now returned home to Moscow from Beijing, although her flight was delayed by two hours.

Russian Sports Minister Oleg Matytsin called on the world to help Valieva recover from her trauma in Beijing.

"I call on everyone to render support to Kamila," he told TASS.

"First of all, to help her to recover and to show her that as of today she is the world’s best figure skater.