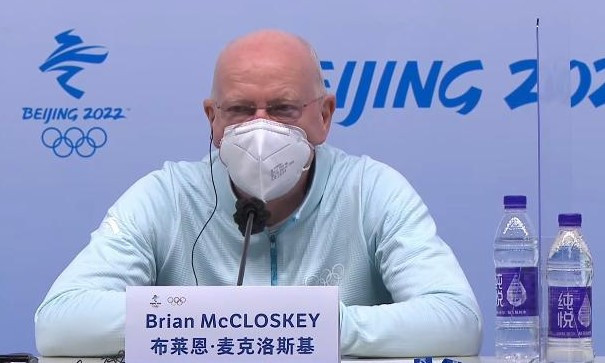 Beijing 2022 medical expert panel chair Dr Brian McCloskey has claimed the COVID-19 situation has evolved as expected during the early stages of the Winter Olympics here, amid a fall in the number of positive cases and athletes in isolation.

Organisers reported only six positive cases in testing yesterday, with none at the Beijing Capital International Airport for the first time with 133 Olympic-related arrivals yesterday.

The new positive cases were reported from a total of 70,524 tests conducted within the closed loop system.

It impacted five athletes and team officials, as well one other Games-stakeholder.

The latest figures take the number of overall positive cases to 247 on arrival during the Games-time period from 12,830 tests.

The Games-time period began on January 23.

"When we started this process we said we were putting in place three layers of testing to make sure the Games were safe, pre-departure, airport and inside the closed loop," McCloskey, chair of the Beijing 2022 Medical Expert Panel, said.

McCloskey was formerly the director of global health for Public Health England and was involved in health planning for the 2012 Olympic and Paralympic Games in London.

"We are seeing it evolve as we expected it to and we still believe the situation inside the closed loop is extremely safe," he said.

“That is good news.

“We cannot relax, we never relax about coronavirus."

McCloskey confirmed 32 athletes are in isolation currently at the Games, adding that 50 have been discharged.

He revealed that average stay in isolation at the Games is now seven days, although athletes with previous infections are being released after four on average.

Athletes who test positive for the first time at the Games are staying in isolation on average for eight days.

Polish short track speed skater Natalia Maliszewska and Australian curler Tahli Gill were both reported to have experienced positive and negative test results at the Games.

The former was initially released to compete in the women’s 500 metres event, before missed her competition after being returned to isolation following another positive result.

Maliszewska has since been released and is due to compete in the team competition.

Gill had been withdrawn prior to Australia’s final two matches of the mixed doubles curling event, but earned a late reprieve after it was deemed that she was not infectious.

Organisers have faced criticism for their handling of the cases.

McCloskey claimed the expert panel is seeking to manage risks to allow as many athletes to compete under close contact protocols, as long as it is safe to do so.

He acknowledged in some cases the system had "not gone as well as it should have done".

But it is not an exact science, he claimed.

"There is no absolute figure that says if you are above this figure you are okay and if you are below it you are not," McCloskey said.

"We have protocols for what the CT (cycle threshold) values in the test might be.

"But the reality is we look at the pattern of tests over a period of days and weeks.

"This is to see if this is a case where people with intermittent positive testing are shedding dead particles of virus and don’t have live virus and therefore can move into the close contact protocol.

"There are no fixed values, but what we look for are indications that our assumption they are not infectious might be changing.

"If they become infectious, they will not be allowed to compete."

McCloskey expressed sympathy for athletes who have faced isolation and promised that efforts are ongoing to improve conditions.

He had been part of an IOC Athletes’ Commission call on Sunday (February 6), which saw officials pledge to improve the provision of food and sporting equipment to the athletes, as well as ensuring unrestricted Internet access.