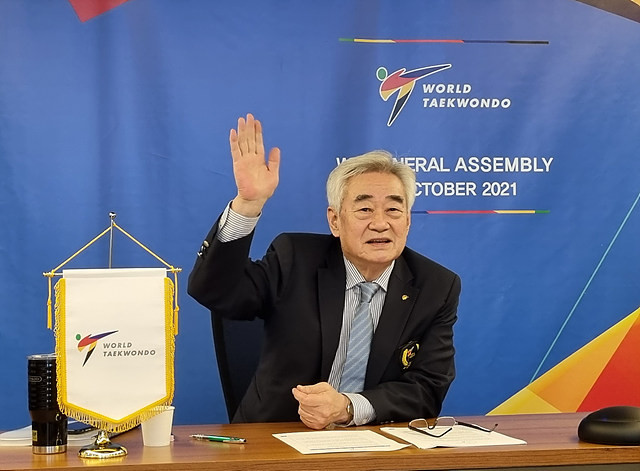 World Taekwondo President Chungwon Choue has branded 2022 a year for "restart", with major events scheduled to return to the International Federation's calendar.

Choue said in his New Year message the events form a key part of World Taekwondo's plans for the forthcoming year.

The President also discussed virtual taekwondo, which was shown to International Olympic Committee President Thomas Bach at the World Championships in Manchester in 2019.

Online events have developed since the beginning of the pandemic, and Choue outlined plans to continue the expansion of the virtual version of the sport.

"World Taekwondo will inspire innovation and connect with global Taekwondoin with the launch of virtual taekwondo, which combines physical fitness and gaming," he said.

"Over the coming year, sport taekwondo will undergo improvements to become more dynamic, athletic, and exciting.

"We will achieve all this as we strive to be one of the best governed international federations."

Choue claimed that 2021 represented "a marked improvement in terms of operations" at World Taekwondo, citing the sport's sixth consecutive appearance at the Olympic Games and its "exciting" Paralympic debut at Tokyo 2020.

Para taekwondo will feature an additional four medal events at Paris 2024, with five weight divisions for both men and women.

"Without a doubt, taekwondo has evolved into one of the fairest, most transparent, and most innovative sports in the world," Choue argued.

"Taekwondo’s inclusion in the Olympic Games Los Angeles 2028 sports programme is testament of our global standing within the Olympic Movement."

He reflected further on World Taekwondo's achievements throughout the year, adding: "Despite the pandemic, World Taekwondo continues to contribute to the UN [United Nations] Sustainable Development Goals and Olympic Agenda, such as the first-ever World Taekwondo Women’s Open Championships in Riyadh, Saudi Arabia, to promote gender equality, and online poomsae open competitions to promote health and fitness globally."

Choue also used his New Year message to highlight the involvement of the Refugee Olympic Team in taekwondo at Tokyo 2020, and the International Federation's work in assisting with evacuations from Afghanistan following the Taliban's return to power.

World Taekwondo's membership rose to 211 in November with the admission of Vatican Taekwondo, and the President thanked each of its National Federations.

"To our 211 Member National Associations around the world, taekwondo is where we are today because of you," he said.

"Thank you for your dedication and passion for our beloved taekwondo."

Choue was elected unopposed to a fifth full term as World Taekwondo President in October last year, having first assumed the position in 2004.