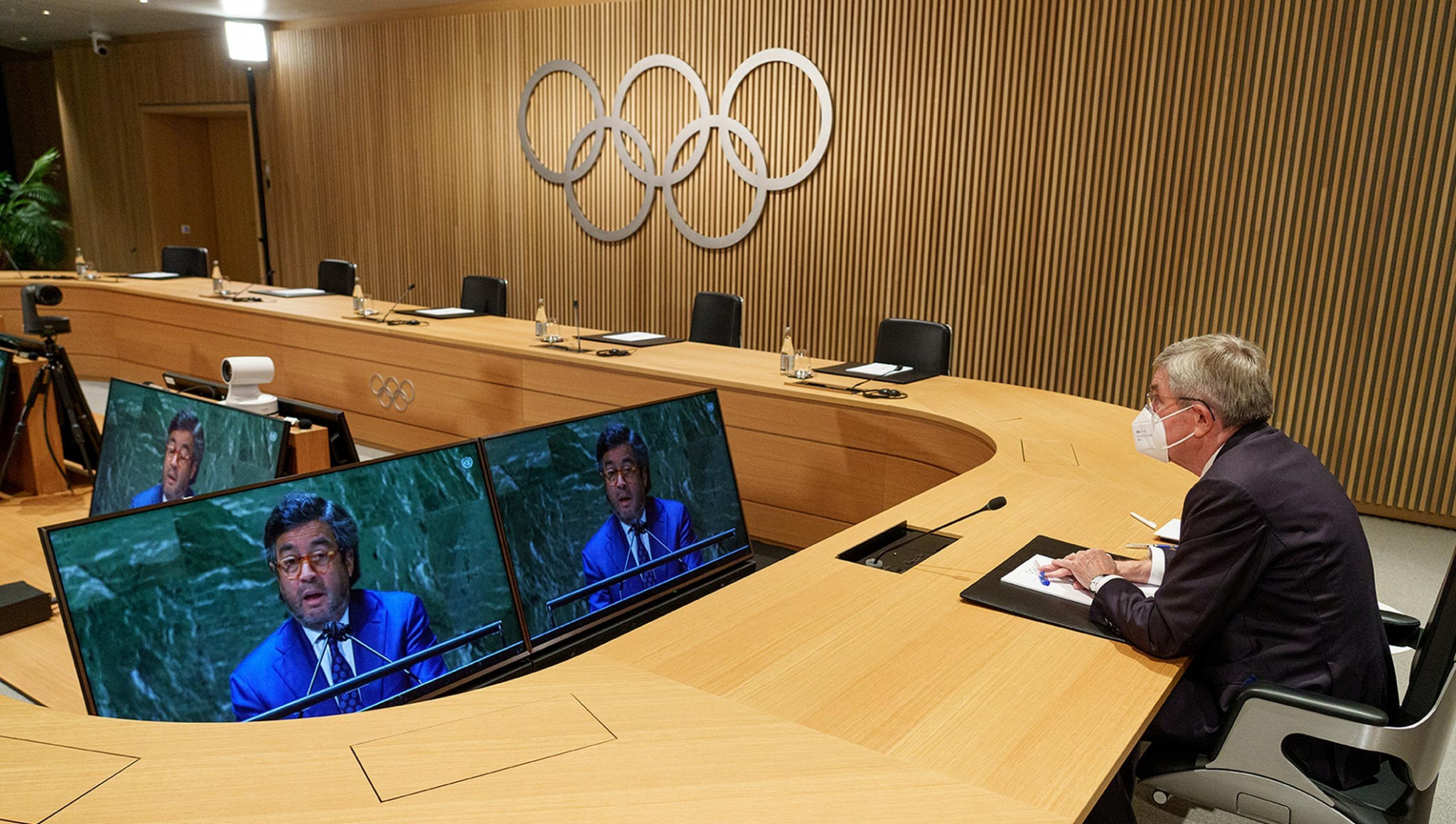 The United Nations (UN) has adopted an Olympic Truce that will remain in force for the duration of the Beijing 2022 Winter Olympics and Paralympics.

The resolution "Building a peaceful and better world through sport and the Olympic ideal" was formally laid before the General Assembly in New York and passed by consensus.

The truce is to run from seven days before the beginning of the Winter Olympics on February 4 to seven days after the end of the Paralympics.

IOC President Thomas Bach was unable to travel to New York to request the adoption in person because of COVID-19 pandemic restrictions.

His speech to the assembly was delivered by Luis Alberto Moreno, IOC member in Colombia who has been permanent observer of the IOC to the UN since 2019.

Bach watched proceedings from his office in Lausanne.

"By adopting this resolution, you are supporting the mission of the Olympic Games to unite the best winter sport athletes of the entire world, without any discrimination whatsoever, in a peaceful and respectful competition," the UN was told.

"This bond of our shared humanity is even more relevant in our polarised world today.

"We can only accomplish this mission if the Olympic Games stand above and beyond all political, cultural and other differences.

"This is only possible if the Olympic Games are politically neutral and do not become a tool to achieve political goals."

The IOC has faced intense criticism for awarding the 2022 Winter Olympic and Paralympic Games to Chinese capital Beijing.

China's human rights record, including its governance in Hong Kong and Tibet and others, and its treatment of other minorities including Uyghur Muslims in Xinjiang, has been strongly questioned, with several Western countries considering a diplomatic boycott.

The Peng Shaui controversy has also increased pressure on the IOC and China.

The declaration invoked the spirit of the "Ekecheiria", a truce said to allow warring cities to send athletes to the Olympic Games of Antiquity held in Olympia.

In October, Bach had been present when three Greek municipalities signed their own declaration calling for a truce on the eve of the lighting of Beijing 2022's Olympic Flame.

"These Olympic Winter Games will also be a great demonstration of the safe organisation of such a global event in the context of the zero-COVID strategy, which has proven so successful for China," Bach’s speech insisted.

"Beijing 2022 will also show the way forward with all Olympic venues being powered with renewable energy.

"Most venues in Beijing are a legacy of the Olympic Games Beijing 2008.

"The millions of new winter sport enthusiasts will ensure the use of the Olympic venues for the future."

IPC President Andrew Parsons added his support for the resolution, which also encompasses the Paralympic Games, which begin on March 4.

"At the Beijing 2022 Paralympic Winter Games, sport and peace will be united, and our athletes will deliver performances that will inspire and empower," Parsons said.

"These Games will continue to transform attitudes and lead to greater social inclusion for the world’s 1.2 billion persons with disabilities.

"Change starts with sport, and together we can create a more peaceful world."

The resolution was co-sponsored by 173 of the 193 member states.

It continues a sequence initiated before the 1994 Lillehammer Winter Games.

In the tradition of previous resolutions, the text had been submitted by the diplomatic mission of the People’s Republic of China.

It comes a day after the Women’s Tennis Association suspended tournaments in China due to concern for the safety of Peng, who accused Zhang Gaoli, a former senior vice-premier and high-ranking member of the ruling Chinese Communist Party, of sexual assault.