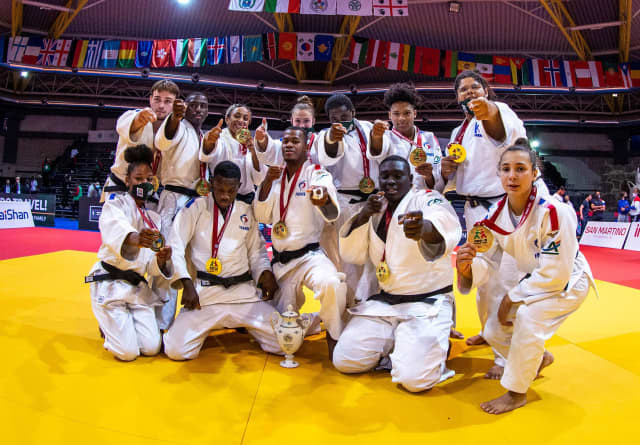 France ended the World Junior Judo Championships in fine style, winning the mixed team event in a demonstration that the nation's pipeline of talent remains in good health.

The French won the mixed team competition at the Tokyo 2020 Olympics earlier this year and were the top seeds at this International Judo Federation age-group event in Olbia in Italy.

France beat Turkey and Ukraine, winning each tie 4-1, to set up a showdown with second seeds Russia for the gold medal.

French class shone through in the final, with Les Bleus winning all four of the contested bouts to romp to victory.

Coralie Hayme beat Alana Alborova via ippon in a women's over-70-kilogram contest, Francis Damier needed only 1min 19sec to throw Daniil Dranovskii to the tatami and earn another French win in the men's under-90kg, while Mélodie Turpin beat Daria Vasileva in a women's under-70kg battle.

The victory was especially sweet for Hayme as it is her second gold medal of the event, having already won the women's under-21 heavyweight world title.