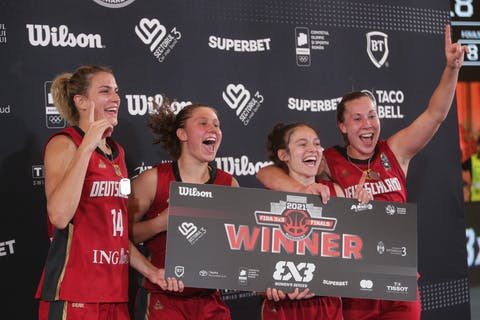 Germany won the second edition of the International Basketball Federation (FIBA) Women's 3x3 Series, following a final victory over Canada at the Palace of the Parliament in Bucharest in Romania.

The team of Luana Rodefeld, Sonja Greinacher, Svenja Brunckhorst and Jennifer Crowder won 18-14 against the Canadians, thanks to Rodefeld icing the game with two successful free throws with five seconds to go at the Bucharest Final.

It was one week after the team finished second at the FIBA 3x3 Europe Cup to Spain in Paris.

Greinacher - who had the most rebounds and was ranked as number one player in value throughout the season - was named Most Valuable Player of the final.

Despite their loss, Canada's Michelle Plouffe led both teams in points, key assists and player value in Bucharest.

In the semi-finals, Canada defeated The Netherlands 21-9 and Germany won 16-11 against Poland.

"I was very proud to host the best female 3x3 players in the world, in partnership with Sport Arena Streetball, in the iconic location of the Palace of the Parliament in Bucharest this weekend," said Tocala.

"Women in basketball is one of the three strategic priorities of FIBA, this is why the introduction of prize money [for teams and individual players] this season and the overall growth of the FIBA 3x3 Women's Series is of paramount importance to me."

Poland finished third in front of The Netherlands in fourth.

Completing the top eight was Austria, Romania, Mongolia and Russia.