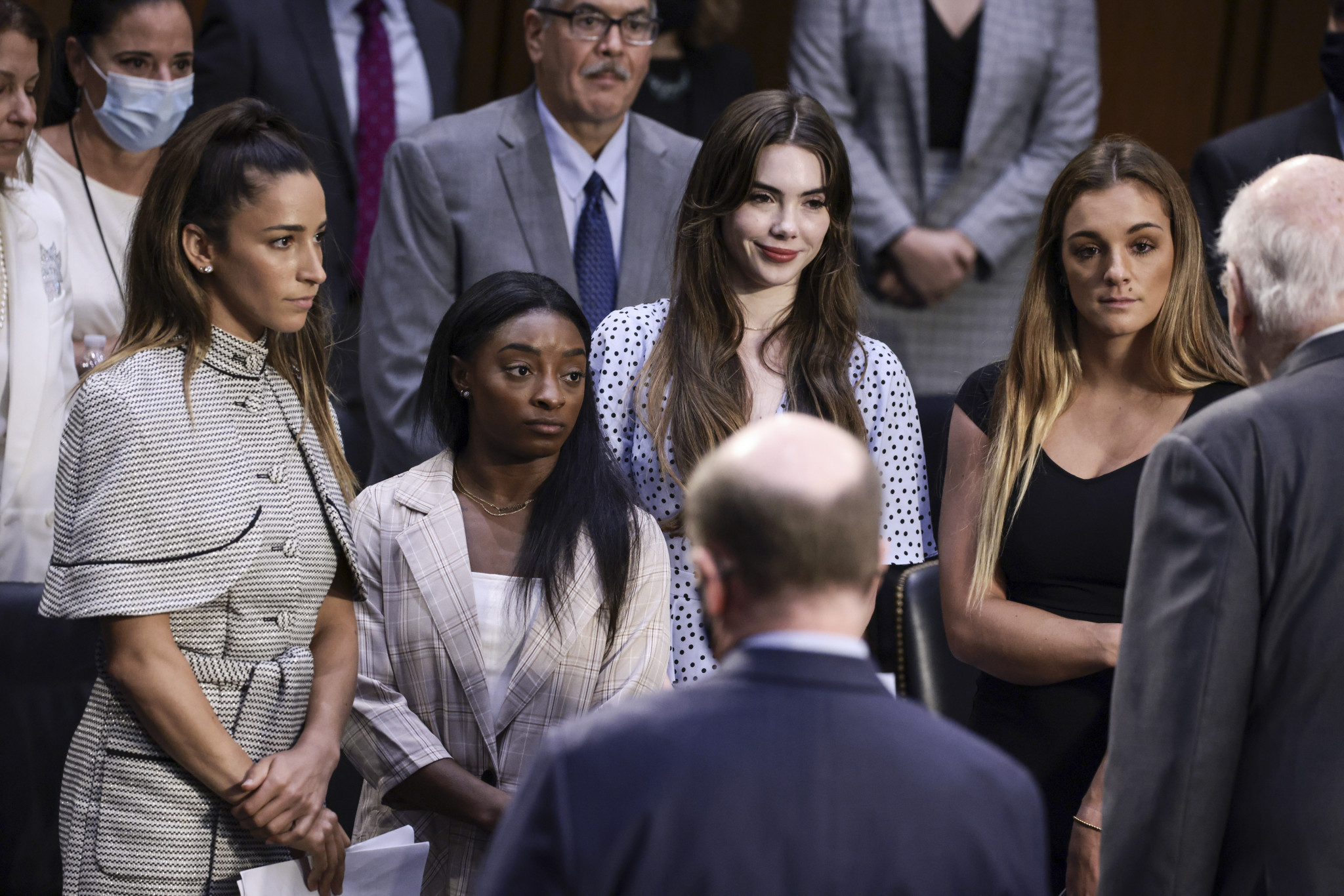 The Federal Bureau of Investigation (FBI) has been castigated by survivors of Larry Nassar's abuse for its handling of the investigation - one FBI director Christopher Wray accepts contained "totally unacceptable" errors - at a Senate Judiciary Committee hearing on the case.

The hearing follows a damning report into the FBI investigation by the Department of Justice Office (DOJ) Office of the Inspector General (OIG), which laid bare failings that enabled Nassar to continue to abuse young gymnasts for more than a year after the FBI was first alerted to his crimes.

Simone Biles, McKayla Maroney, Maggie Nichols and Aly Raisman, who all won medals for the United States at either the World Championships or the Olympic Games, gave testimony, while Senate Judiciary Committee chair Richard Durbin slammed the FBI's handling of the case, describing them as "a stain on the bureau" in his opening remarks.

USA Gymnastics (USAG) and the United States Olympic and Paralympic Committee (USOPC) also came under fire for their shortcomings.

"For many of them this was a continuation, but for others they were abused for the first time while the FBI sat on the case."

In her testimony, Biles - widely regarded as the greatest gymnast of all time - declared that "I blame Larry Nassar and I also blame an entire system that enabled and perpetrated his abuse.

"USA Gymnastics and the USOPC knew that I was abused by their official team doctor long before I was ever made aware of their knowledge."

Raisman's testimony was damning of the FBI investigation, highlighting several of the deficiencies outlined by the DOJ OIG report.

"Over the past few years it has become painfully clear how a survivor's healing is affected by the handling of their abuse, and it disgusts me that we are still fighting for the most basic answers and accountability over six years later," Raisman said.

"In 2015 it was known that a least six national-team athletes had been abused by Nassar.

"There was even a video of one athlete’s abuse.

"Given our abuser's unfettered access to children, stopping him should have been a priority.

"Instead the following occurred…"

Raisman went on to record failings including it taking "over 14 months for the FBI to contact me despite my multiple requests to be interviewed", being "pressured by the FBI to consent to Nassar's plea deal" and FBI agent Jay Abbott meeting Steve Penny to discuss a USOPC job opportunity over beers while Penny was USA Gymnastics President.

Penny, who stepped down in 2017 - reportedly with a severance package worth $1 million (721,000/€841,000) - has subsequently been charged with evidence-tampering and faces two to 10 years in prison if convicted in Texas.

Abbott retired in 2018 and Wray said today that another FBI agent who worked in the case and was criticised by the OIG report had been fired since its publication.

Raisman also bemoaned having had to watch "multiple high-ranking officials at USAG, USOPC, and the FBI, resign or 'retire' without explanation of how they may have contributed to the problem, some of whom were publicly thanked for their service and rewarded with severance or bonus money".

Raisman continued: "The FBI and others within both USAG and USOPC knew that Nassar molested children and did nothing to restrict his access.

"Steve Penny and any USAG employee could have walked a few steps to file a report with Indiana Child Protective Services, since they shared the same building.

"Instead they quietly allowed Nassar to slip out the side door, knowingly allowing him to continue his work at MSU [Michigan State University], Sparrow Hospital, a USAG club, and even to run for school board."

Raisman reiterated a call for a full and independent investigation "because I and these women who sit before you now know first-hand these organisations and their public statements are not to be trusted".

"The so-called investigations these organisations orchestrated were not designed to provide the answers we so critically need," she continued.

"Why are we left to guess why USAG and USOPC deliberately ignored reported abuse?

"Was it to protect the value of its sponsorships?

"Perhaps, but why must we speculate when the facts are obtainable and the stakes are so high?"

"I want everyone to know that this didn't happen to Gymnast #2 or Athlete A, it happened to me, Maggie Nichols." pic.twitter.com/FoIubHMro0

The survivors of Nassar's abuse have consistently demanded an independent investigation be conducted.

Maroney also slammed the FBI, saying the case represented "very clear, cookie-cutter paedophilia and abuse and this is important because I told the FBI all of this and they chose to falsify my report and to not only minimise my abuse but silence me yet again".

Nichols, who began her testimony by saying "I want everyone to know that this didn't happen to Gymnast #2 or Athlete A, it happened to me, Maggie Nichols," also sought to highlight FBI, USOPC and USA Gymnastics failings.

"Not only did the FBI fail to conduct a thorough investigation, but they also knew that USAG and the USOPC created a false narrative where Lassar Nassar was allowed to retire with his reputation intact and allowed to return to Michigan State University, thus allowing dozens of little girls to be molested," Nichols said.

"As the inspector general's report details, during this time period, FBI agents did not properly document evidence, failed to report to proper authorities and the special agent in charge was seeking to become the new director of security for the United States Olympic and Paralympic Committee."

Nassar was accused by more than 200 people of abuse under the guise of medical treatment and is serving up to 175 years in prison.

The proposal still needs to be approved by multiple parties, including the US Bankruptcy Court for the Southern District of Indiana and a majority of the claimants that totals two-thirds of the value of the settlement.

Every insurance company involved must also approve the settlement for it to be confirmed.

Biles said earlier this year that the abuse she suffered contributed to the issues which led to her withdrawal from several events at the Tokyo 2020 2020 Olympic Games, where she claimed bronze in the balance beam final and a team silver medal.

Today she complained of how survivors "continue to suffer" and believe investigators were looking out for governing bodies rather than athletes' welfare.

"We suffered and continue to suffer because no one at the FBI, USAG or the USOPC did what was necessary to protect us," Biles said.

"We have been failed and we deserve answers.

"Nassar is where he belongs, but those who enabled him deserve to be held accountable.

"If they are not, I am convinced that this will continue to happen to others Olympic sports.

"In reviewing the OIG's report, it truly feels like the FBI turned a blind eye to us and went out of its way to protect USAG and USOPC."