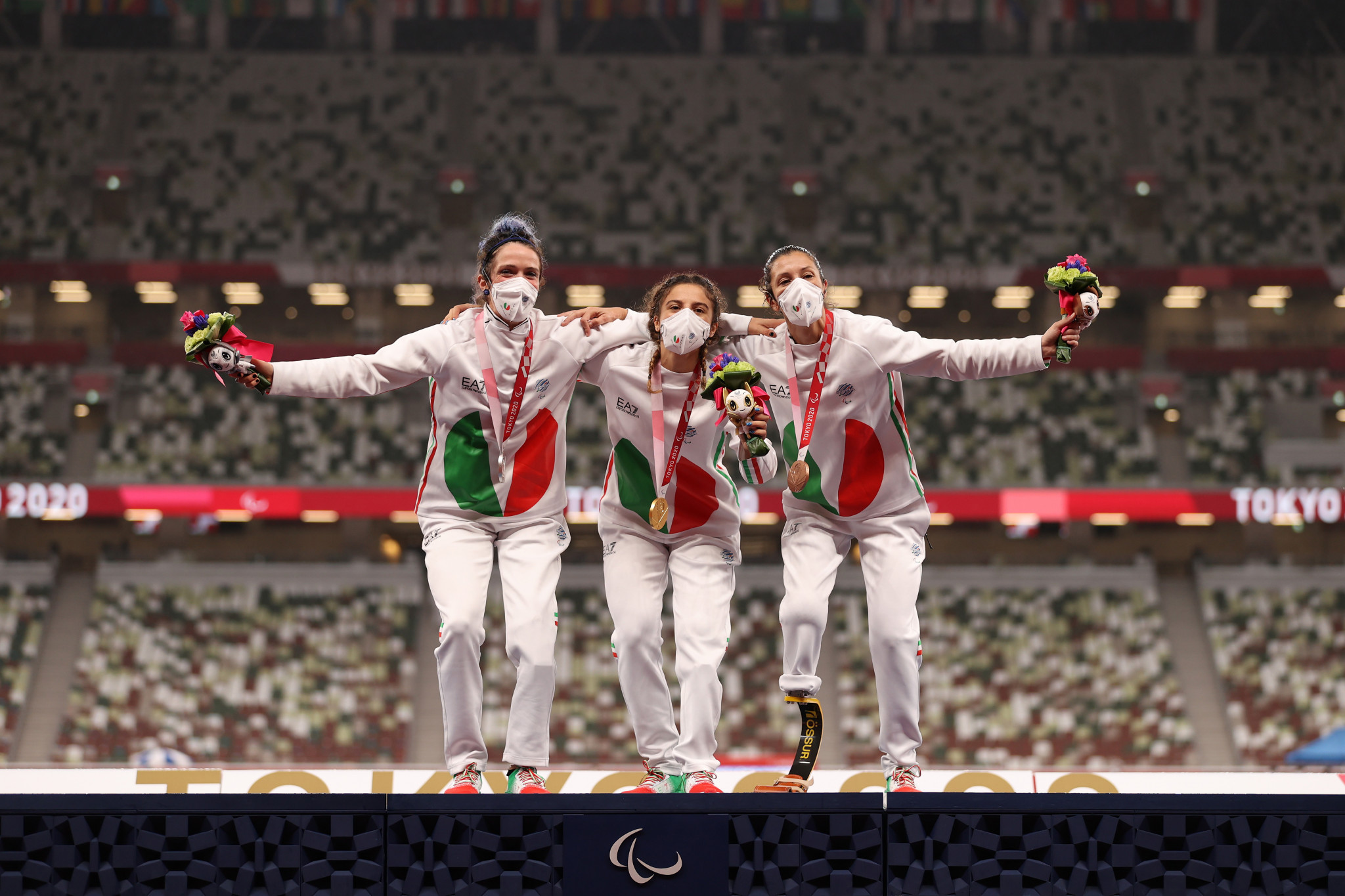 An all-Italian podium ended the last day of track and field competition in athletics at the Tokyo 2020 Paralympic Games, with Ambra Sabatini setting a new world record in the women's T63 100 metres final.

Even with the raining thrashing down in the Olympic Stadium, the Italian delegation in attendance were fiery as they witnessed Sabatini cross the line in a new best of 14.11sec.

Earlier, Costa Rica's Sherman Isidro Guity Guity took the gold medal in the men's T64 200m after coming off the bend with incredible speed to record a time of 21.43 - a new Paralympic record.

In what can be regarded as the best women's T38 400m in history, Germany's Lindy Ave set a new world record of 1min 00.00sec, just ahead of the Russian Paralympic Committee's (RPC) Margarita Goncharova who took advantage of a drier lane nine to squeeze into silver with a personal best.

Only 17 hundredths separated the top three athletes, who took the race down to a photo finish.

Britain's Hannah Cockroft put in one of the performances of the day, winning gold in the women's T34 800m and claiming her seventh Paralympic title.

She crossed the line in a Paralympic record of 1:48.99, nearly 11 seconds in front of her compatriot Kare Adenegan, who won silver with a new personal best.

It was also 12 seconds quicker than her previous Paralympic record.

Alexa Halko of the United States took the bronze medal.

Moroccan Ayoub Sadni won the men's T47 400m final, finishing strongly to break the world record in a time of 47.38.

Thomaz Ruan de Moraes of Brazil won the silver in a personal best and his compatriot Petrucio Ferreira dos Santos held on to the bronze as he chased after the line in the final strides.

Nate Riech of Canada went out hard in the men's T38 1500m final and was rewarded with the gold medal, setting a new Paralympic record of 3:58.92.

Coming behind in a close pack for silver was Algerian Abdelkrim Krai, closely followed by Deon Kenzie of Australia.

She broke the world record in the women's T12 200m in a time of 23.02 with her guide Yuniol Kindelan Vargas.

Both athletes crossed the line in 24.94, but the Chinese sprinter claimed the gold.

Lisbeli Marina Vera Andrade of Venezuela was the gold medallist in the women's T47 200m in a time of 24.52, seventh hundredths slower than the fastest time ever.

She was a fair distance in front of the rest of the field, as Brittni Mason of the United States was nearly half a second down for silver, just having enough to hold off bronze medallist Alicja Jeromin of Poland.

Dmitrii Safranov of the RPC broke his second world record of the Games with a victory in the men's T35 200m in a time of 23.00.

Azerbaijan continued their terrific Tokyo 2020 Paralympics campaign so far, with two gold medals at the Stadium early in the day.

Adiaratou Iglesias Forneiro of Spain set a new personal best for second, and American Kym Crosby bettered her personal best too for bronze.

A second gold medal of the day went to Orkhan Aslanov winning the men's T13 long jump with a new European record of 7.36 metres.

Ivan Jose Cano Blanco of Spain was the silver medallist and Isaac Jean-Paul of the United States took bronze.

Malaysia has a gold medal in athletics thanks to Abdul Latif Romly in the men's T20 long jump final, with a best of 7.45m.

He injured himself after his fifth round jump, but was already clear of the field.

Athanasios Prodromou of Greece won silver late in the event, pushing Australian Nicholas Hum down to the bronze medal position.

Renata Sliwinska of Poland won the gold medal in the women's F40 shot put with a new Paralympic record of 8.75m.

Ahmad Hindi of Jordan broke the world record in the men's F34 shot put with a mark of 12.25m for gold, beating Azeddine Nouiri of Morocco, who claimed silver.

Qatar won its first medal of the Games with bronze, thanks to Abdulrahman Abdulqadar Fiqi.

Nurkhon Kurbanova of Uzbekistan added a silver to her bronze in the women's F54 shot put.

Sun Pengxiang of China is the new Paralympic champion in the men's F41 javelin with a world record throw of 47.13m.

The reigning champion, Kovan Abdulraheem, also of Iraq, can only muster sixth.

Zakariae Derhem of Morocco broke the Paralympic record with a best of 11.37m to win the gold medal in the men's F33 shot put - but the top four were only separated by 16 centimetres.

Regional rival Kamel Kardjena took the silver, 3cm short of Derhem, while Deni Cerni of Croatia threw a best of 11.25m for bronze, 4cm in front of the RPC's Aleksandr Khrupin.

Mi Na is the new Paralympic champion in the women's F38 discus - with a world record throw of 38.50m.

She is joined on the podium in second by Chinese compatriot Li Yingli, who won the silver on her second-best throw as she and Mexican Rosa Carolina Castro both threw a best of 33.73m.

Finally, Britain's Aled Davies is a Paralympic champion for the third time, and for a second time in shot put, after winning gold in the men's F63 category.

He threw a best of 15.33m, to win gold at his third straight Games.

Silver went to Iran's Sajad Mohammadian and bronze to Faisal Sorour of Kuwait.