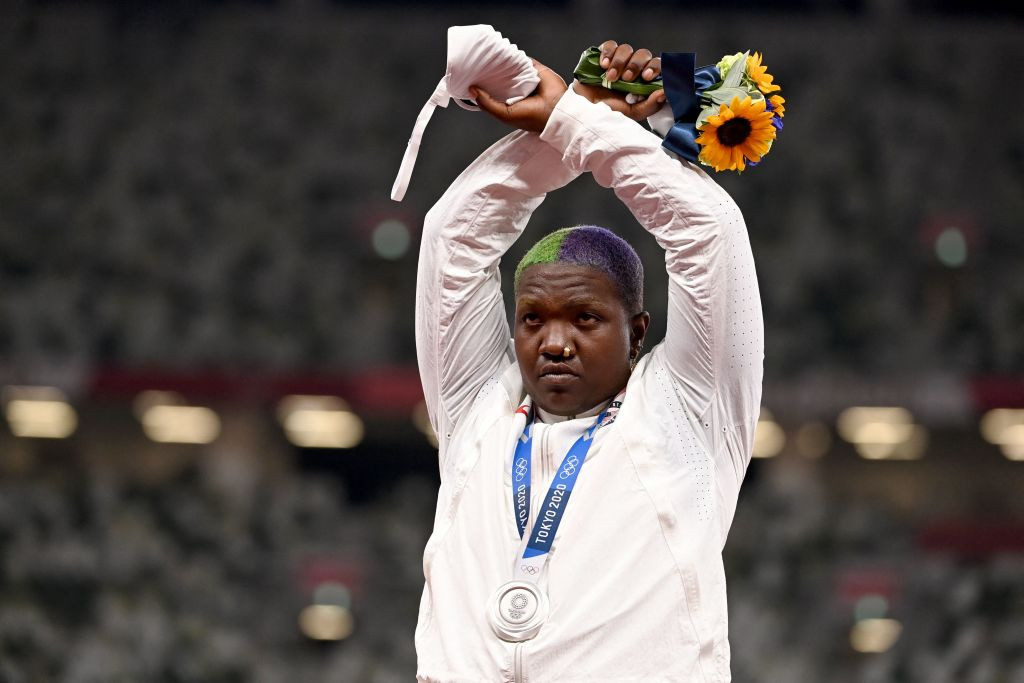 American shot putter Raven Saunders has become the first athlete to demonstrate on the podium here Tokyo 2020 in a test of the International Olympic Committee's (IOC) Rule 50.

Saunders raised her arms and formed an "x" after collecting her silver medal at the Olympic Stadium last night.

The 25-year-old told Associated Press that she made the gesture to represent "the intersection of where all people who are oppressed meet".

The IOC has partially relaxed rules on demonstrations and protests at the Olympics but has insisted such acts on the podium are still banned.

IOC Presidential spokesperson Mark Adams revealed the organisation was "looking into" the demonstration from Saunders.

Adams added the IOC was discussing the protest with World Athletics and the United States Olympic and Paralympic Committee, which has already confirmed it will not punish athletes for demonstrations.

The IOC has warned athletes who protest or demonstrate on the podium could be sanctioned.

It has said incidents will be dealt with on a "case-by-case" basis, with possible sanctions to be determined by the IOC's Legal Affairs Commission.

The IOC has allowed athletes to express themselves in certain areas of the field of play, providing doing so falls under the respective International Federation's rules, as part of a change to its much-maligned Rule 50.

Footballers have taken the knee before matches at Tokyo 2020, while Costa Rican gymnast Luciana Alvarado knelt to the floor and raised her fist in the air after her floor routine in qualification for the women's team artistic gymnastics event.

The International Swimming Federation is among those to have maintained a ban on all demonstrations on the field of play at the Games.

The IOC Athletes' Commission called for further clarity on the sanctions that could be handed down to athletes who protest at the Olympics after it produced a survey which recommended the ban on podium demonstrations be maintained.

The Commission itself devised Rule 50 guidelines in January of last year, which threated athletes with possible disciplinary action.