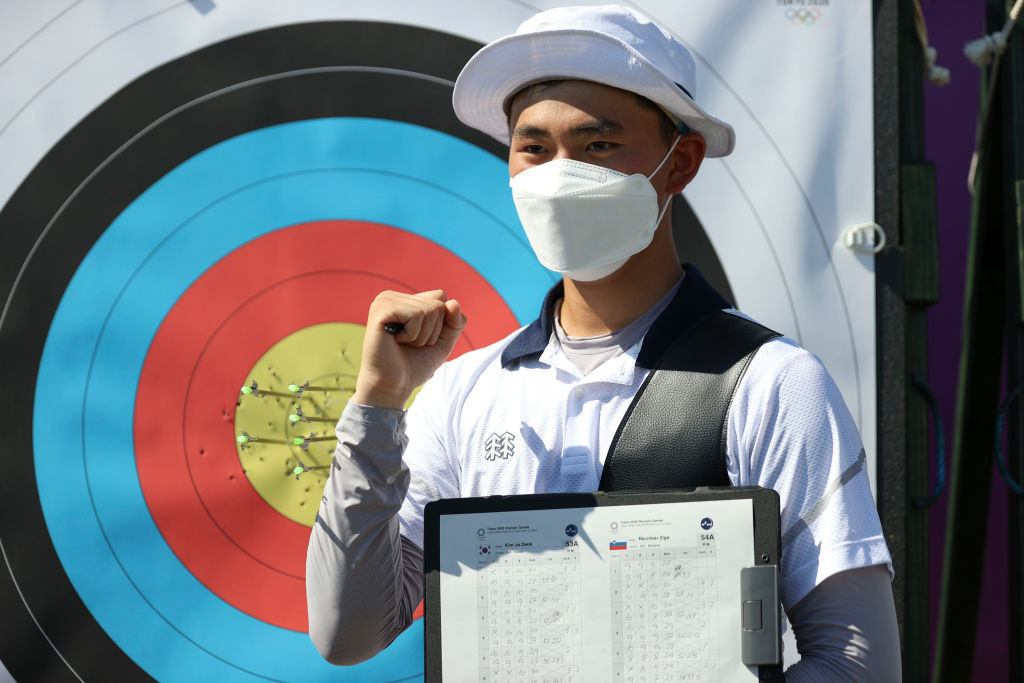 Seventeen-year-old Je Deok Kim of South Korea, the youngest archer at the Tokyo 2020 Olympics, is gunning for gold after topping the men’s individual recurve qualifying with a score of 688 points.

"I’m aiming to get all three gold medals (mixed team, men’s team and individual), but the most important one will be the men’s team gold medal," he said after his grandstand performance in soaring temperatures at Yumenoshima Park Archery Field.

Among his most likely challengers for the individual gold will be compatriot Jinhyek Oh and Brady Ellison of the United States, who finished second and third respectively in qualifying.

Oh, the London 2012 champion, will seek to match the achievement of Darrell Pace of the United States, who won the title in 1976 and 1984.

Ellison is the current world champion and world number one

Meanwhile Kim Woojin is the 72-arrow Olympic record holder, having shot a score of 700 in the men’s individual ranking round at the Rio 2016 Games.

The South Koreans will be defending the men’s team title, having won a medal in this event at seven of the previous eight Games, with their main rivals expected to be China and the United States.

And South Korean ambitions are at an equally high level for the women’s individual competition, which it has won at eight of the last nine Olympic Games, with the exception being Zhang Juanjuan’s victory at the Beijing 2008 Games.

The Koreans, led by Kang Chaeyoung, who holds the world record score of 692, will hope to make a unique sweep of the podium in the women's individual event for the third time in Olympic history, after 1988 and 2000.

But there will be formidable opposition in the form of India’s world number one in the recurve rankings, Deepika Kumari.

The Indian archer earned ninth seeding for her first-round match next Wednesday - against no less an opponent than Karma of Bhutan - with a score of 663 out of a possible 720 points.

Coming into Tokyo 2020, no woman representing India has won a gold medal at the Olympic Games.

Kumari, eliminated in the round of 16 at the Rio 2016 Games, will also seek to become the first archer representing India, male or female, to pick up an individual medal at the Olympics.

South Korea has won the women’s team gold at the last eight Olympics.

Their most likely challenger will be Chinese Taipei, who defeated them in the final of the 2019 world championships, with China and Mexico also expected to figure.

As one might expect, South Korea - represented by Je Deok Kim and 20-year-old An San - will be seeking to establish another gold medal tradition in the inaugural mixed team event that will take place tomorrow (July 24).

Italy, The Netherlands, Chinese Taipei and Great Britain are expected to challenge.