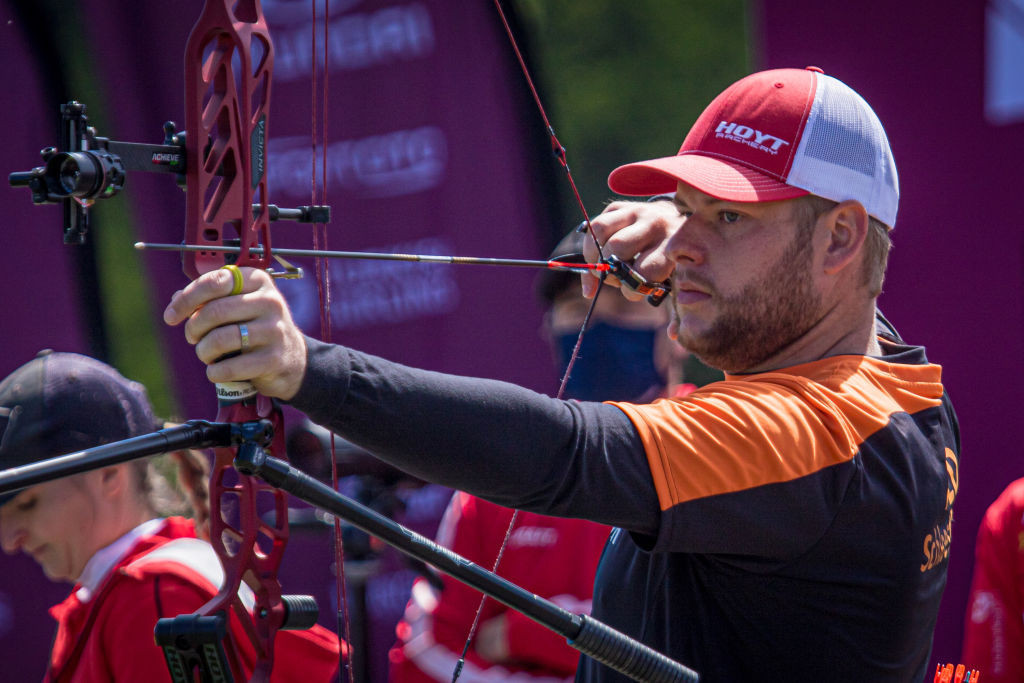 Mike Schloesser became top-scoring qualifier for the compound men individual semi-finals on the third day of the Archery World Cup in Paris - the third in this year’s series.

The 27-year-old Dutchman, world champion in 2013, won the gold at the last World Cup in Lausanne and silver in the opening edition in Guatemala City.

His form at the Charléty Stadium looks highly promising following his 150-149 win over Italy’s Federico Pagnoni.

His semi-final opponent on Saturday (June 26) will be Kris Schaff of the United States, who beat Jean Philippe Bouch of France on a nearest-to-the-centre 10 after they had drawn 148-148.

Also through on the other side of the draw are India’s Abishek Verma, who beat Denmark’s Martin Larsen 10-9 after they had finished at 146-146, and Anton Bulaev of Russia, who also went through by the narrowest of margins after he and Denmark’s Mathias Fullerton both shot 10 after finishing 149-149.

The compound men’s #FinalFour in Paris. ?

Toja Ellison of Slovenia was the highest-scoring qualifier in the compound women quarter-finals as she beat Page Pearce of the US 149-144.

Her opponent on Saturday will be Alejandra Usquiano of Colombia, who advanced with a 147-143 win over Sarah Prieels of Belgium.

Colombia will also be represented in the second semi-final through Sara Lopez, twice world team gold medallist and the first woman to score a maximum 150, who went through with a 145-144 win over Sanne De Laat of The Netherlands.

Saturday represents the last chance for compound archers to qualify for the 2021 Archery World Cup Final in Yankton.

With Nora Valdez already qualified after winning gold at the season’s opener in Guatemala City only one other Colombian women’s place will be available in Yankton.

The compound women’s #FinalFour in Paris. ?

"If I get to go, it's amazing. If I don't, that's amazing because anyway we will have Colombian there," Lopez, winner of a record five World Cups, but who has struggled with an uncharacteristic bout of target panic all season, said.

"The goal for me was to control myself, to not let the target panic come back.

"So for me, it's a gold medal already because I was able to control it."

In the morning’s mixed team competition, Russia, with a 156-151 win over Italy, and Colombia, with a 159-158 victory over Denmark, earned their places in the compound final due to take place on Sunday (June 27).

In the recurve mixed team final India’s Deepika Kumari – winner of the recurve women’s individual gold in the opening World Cup of the season and through to the last four here – and Atanu Das, will face Gabriella Schloesser and Sjef Van Den Berg of The Netherlands.

The Indian pairing beat Spain 5-3, while the Dutch pair earned a win over Mexico by the same score.