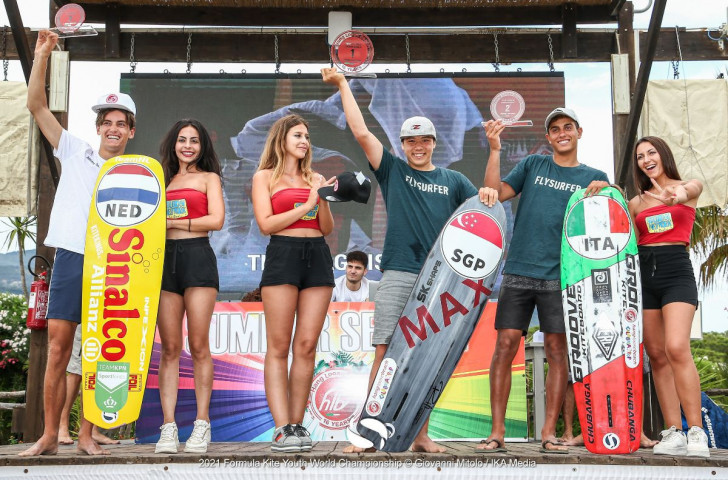 Maeder went into the medal series needing just one win to become world champion after amassing two match points from yesterday’s racing off the Calabrian coast.

Jis van Hees of The Netherlands and Pole Jakub Jurkowski progressed to meet Maeder and Italian sailor Riccardo Pianosi in the final, with the first to win three match points being crowned champion.

Maeder ended any chance of an upset by winning the first race, with Pianosi taking silver and Van Hees claiming bronze.

"It feels amazing, I am so thankful to the organisers, to the competitors and my supporters, it would have never happened without them" said Maeder.

"I feel tired but happy, a lot of mixed emotions but mostly just happy.

"It was quite a fight with Riccardo, he is a great competitor, but I think I’ve just had one of the best races I’ve ever had today, I took a good lead and won."

The women’s event was cut short when thunderstorms started to close in on Gizzeria.

Magdalena Woyciechowska of Poland won the only race, but her compatriot Julia Damasiewicz finished just behind and secured the title in doing so.

Polish athletes occupied all three places on the podium with, Nina Arcis winning the bronze medal.

In the A’s Youth Foil class, a mixed-gender under-17 event, Angelo Soli and Daan Baute of Italy and Belgium joined Russian Mikhail Novikov and Pole Jan Koszowski in the finals.

Kosowski only needed to win one race today, which he did at the first time of asking, cementing his status as world champion.

Despite finishing last in the only race of the day, Novikov had done enough in his previous outings to come second.

Soli rounded out the top three by beating Baute to second position in today’s race.

"It is such a great feeling, it is my first time winning a World Championship, so I am super happy," Soli said.

"I can only say it hasn’t been easy, it was a very balanced fleet and I didn’t win all the races effortlessly, I am so happy I made it today."

Formula Kite is due to be on the Olympic programme at Paris 2024.