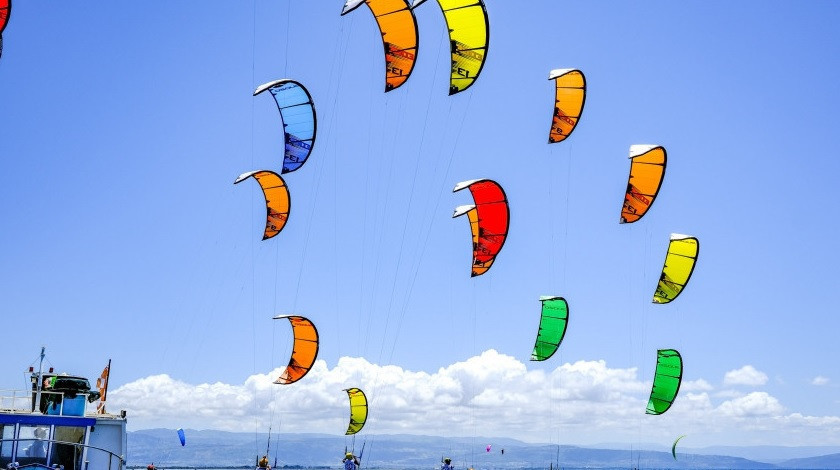 Singapore's Maximilian Maeder and Poland's Julia Damasiewicz had another perfect day at the Formula Kite Under-19 World Championships at Gizzeria to carry commanding leads into tomorrow's medal rounds.

Three wins out of four races on day four at the southern Italian venue in Calabria ensured Maeder was able to proceed into tomorrow’s medal round with the minimum number of points, 13.

His opening race at Hang Loose Beach involved a "scary" did not compete due to equipment failure, according to the official site, but after discarding the 26 points incurred the leader restored his equilibrium to win his three remaining contests.

He goes into tomorrow’s medal series as the number one with two match points.

Second-place home sailor Riccardo Pianosi has one match point and these two will be in the final awaiting the winners of the semi-finals.

"We are going to fight until tomorrow," both Mader and Pianosi said, with the latter adding: "Max is a big boy, he is too fast to catch.

"I will do my best to beat him but it will be difficult, he is in great shape this week."

Pianosi is second on 23 points, having compiled a win and three second-place finishes on the day.

The Netherlands' Jis van Hees remains third, now on a net total of 40.0.

Poland maintained a one-two-three in the women's regatta, led by Damasiewicz, who won all four of her races today to match Maeder’s perfect score of 13.

Magdalena Woyciechowska remains in second place on a net total of 26 after three second-place finishes and a discarded fourth position.

Nina Arcisz is third overall on 42.0.

In the mixed under-17 A's Youth Foil World Championship, Jan Koszowski of Poland remains in the lead by a single point after failing to win any of the four races today.

He sits on a net total of 12 in front of Russian Mikhail Novikov on 13, who finished first in each of today's races.

Angelo Soli of Italy made the top three on three occasions today and remains in third on a net 22 points.

After 16 races, with three discards allowed, in the A’s Youth Foil Championships, Jan Koszowski of Poland led into the medal round with 20 points, followed by Russia’s Mikhail Novikov on 23.

Formula Kite is due to be on the Olympic programme at Paris 2024.