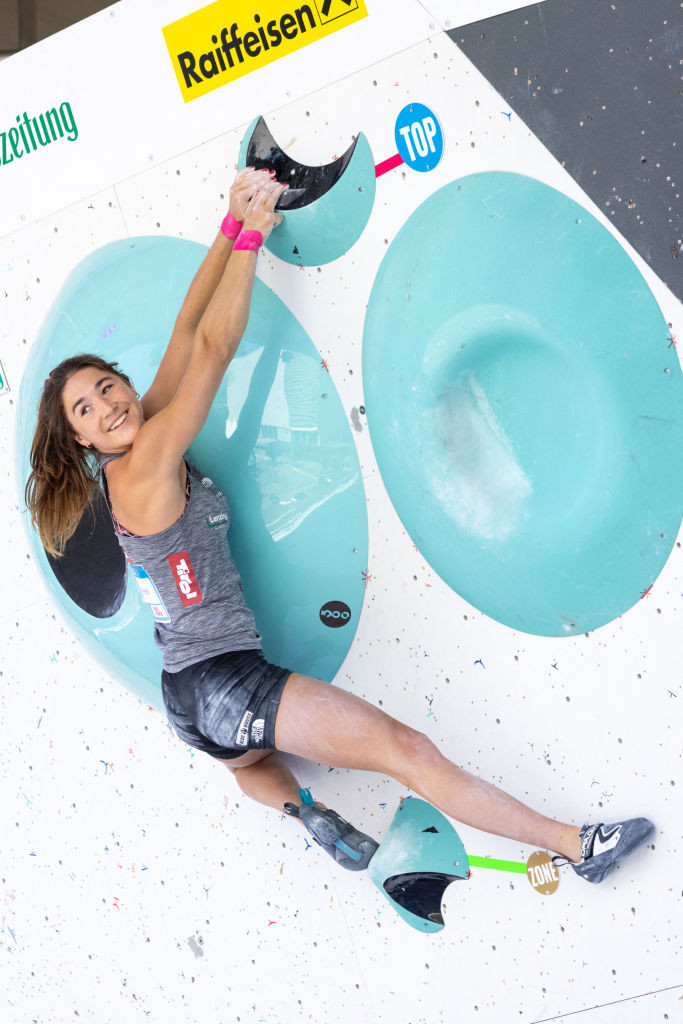 The live broadcast feed of the bouldering semi-finals at the International Sport Climbing Federation World Cup in Innsbruck was temporarily removed from the Federation’s YouTube channel and edited after complaints from viewers over inappropriate footage of a female climber.

The host broadcaster, ORF, showed a slow-motion sequence lasting around five seconds zooming in on chalk handprints on the backside of home climber Johanna Färber while she took part in the women’s bouldering semi-final.

According to observers, there was an immediate criticism of the footage on the live chat accompanying the feed, but despite this the sequence was repeated at the conclusion of the semi-finals, prompting yet more complaints.

The sequences were later edited out of the footage, and an apology issued which the IFSC featured on their Twitter feed.

The host broadcaster, ORF, issued an apology on Twitter and the video of the men’s and women’s boulder semi-finals was temporarily removed from the IFSC YouTube channel.

“The Osterreichischer Rundfunk would like to publicly apologise for the incident that occurred during this morning’s live broadcast and stream of the women’s Boulder semi-final of the IFSC World Cup in Innsbruck, Austria,” the statement from ORF director Michael Kogler said.

“We acknowledge that, for a brief moment, we chose to display the sport of climbing in the wrong way.

“We commit ourselves to keep working for a fair, equal and better representation of women’s sports.

“Our apology goes to Ms Johanna Färber, the International Federation of Sport Climbing, Austria Climbing and all those who felt concern and discomfort for our actions.”

Färber later posted a message on her Instagram describing the incident as "disrespectful and upsetting".

There was further disturbance to the women’s bouldering competition once the final got underway, although from natural causes as heavy rain forced the fourth problem of the series to be cancelled, with results being calculated on how climbers had tackled the three previous tasks.

Silver went to the United States climber who won the last two women’s World Cup bouldering contests in Salt Lake City, beating Garnbret in the second of them – Natalia Grossman.

Bronze went to Serbia’s Staso Gejo, with minor placings going to the three other finalists, all from Japan - Miho Nonaka, Akiyo Noguchi and Futaba Ito.

Less than 20 seconds left?! Not a problem for Simon Lorenzi! ??

Participating in his first World Cup final round, the Belgian climber finds one of the most exciting tops of the season so far!#InnsbruckWC #TheClimbingFest pic.twitter.com/dhEGDNIdwe

Japan also had half the six men contesting the final in Kokoro Fujii, Tomoa Narasaki and Yoshiyuki Ogata, with the others being Nathaniel Coleman of the United States, Austria’s Nicolai Uznik and Simon Lorenzi of Belgium.

Having been delayed, the men’s final also had to say goodbye to the last of the four climbing runs, timed out due to national regulations about public events.

Once again medals were allotted according to the first three rounds, and this time there were three Japanese competitors on the podium as Yoshiyuko Ogata took gold, Tomoa Narasaki silver and Kokoro Fujii bronze.