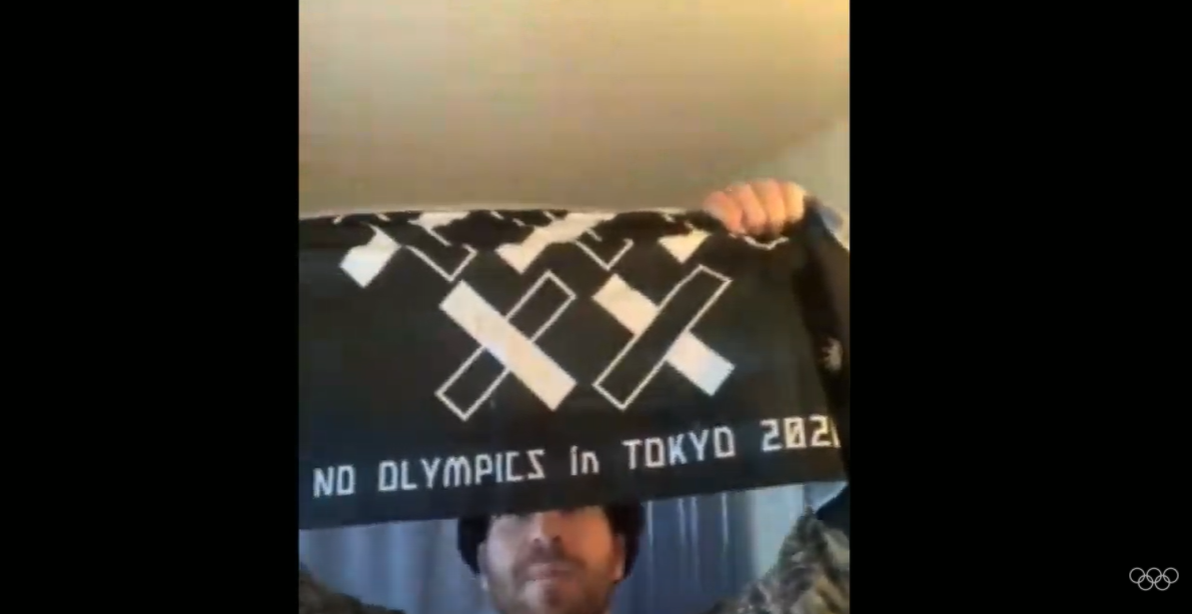 A protestor posing as a reporter gatecrashed an International Olympic Committee (IOC) press conference by unfurling a banner and repeating anti-Olympic messages.

The man, who identified as David O'Brien from Yahoo, was given the last question of the briefing following the latest remote meeting of the IOC Executive Board.

He proceeded to raise a banner to the camera, which read "No Olympics in Tokyo", and repeated the messages "no Olympics anywhere" and "fuck the Olympics".

"No Olympics anywhere," he said.

Campaign group NOlympicsLA said it was behind the protest and warned there would be more to come in the future.

"Today we wanted to let them know that people all over the world are furious with their callous, life-threatening decisions and that we're not going anywhere," it said.

The protestor was shut down by Mark Adams, the IOC's Presidential spokesperson, and the organisation later deleted the video of the incident.

Adams said the man, dressed in full camouflage, was probably disappointed he was giving the press conference rather than IOC President Thomas Bach.

"That probably would have made that stunt a little more interesting," Adams said.

Tokyo 2020 had been the main focus of the meeting, with Adams insisting the Games will go ahead as scheduled this year despite the state of emergency in Japan due to the COVID-19 pandemic and low public support for the event in the host nation.

Emergency measures in areas including Tokyo, which forced Bach to postpone a planned visit to the Japanese capital this month, have been extended because of a recent surge in COVID-19 cases, sparking renewed fears over whether the Olympics and Paralympics will take place.

Japan's low vaccination rate - less than three per cent of the country's population has been vaccinated - has also been a cause for concern.

A petition calling for the cancellation of the Games has garnered more 300,000 signatures online since being established last week, while a new poll has showed that nearly 60 per cent of people in Japan want the rearranged Olympics and Paralympics to be cancelled.

Adams said the IOC and organisers were "moving full ahead" with preparations for the Games, set to open in less than three months' time.

He cited the 12 recent Tokyo 2020 test events, where only one positive COVID-19 case was recorded, backing from the World Health Organization (WHO) for the countermeasures that will be implemented at the Games and the second edition of the "playbooks" as the main reasons why the event will take place as planned.

"We are fully concentrated now, in this last implementation phase, of delivering an excellent Games which will bring the world together," Adams said.

"There has been a small extension of the emergency situation, but we continue to plan for full Games.

"That's the way it has to be and that's the only way it can be for us."

Adams said the Japanese public should be reassured by the WHO support and the series of playbooks" which outline the strict rules all participants must adhere to during the Games.

"They should give Japanese people confidence that these games can be held in a very safe and secure way," he added.