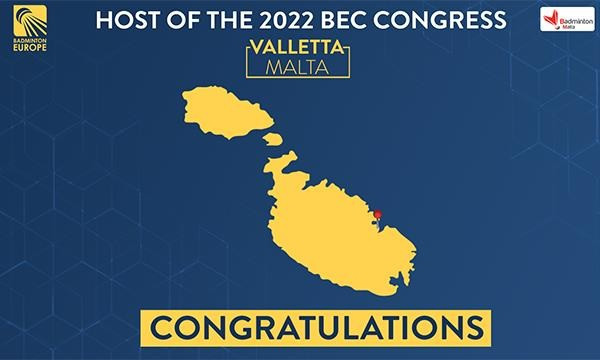 Valletta in Malta has been chosen to stage next year’s Badminton Europe Congress as the organisation hopes to avoid a third successive cancellation caused by the COVID-19 pandemic.

The 2020 and 2021 editions of the Congress were scheduled to be held in Bucharest in Romania and Ukrainian capital Kiev respectively only to be called off as a result of the global health crisis.

The Badminton Europe Board of Directors said they are now hoping to stage the meeting in "spring 2022."

It will be the first time Malta has staged the Congress.

"We had quite a number of bids, and the decision was to go to Valletta because it was the best choice," said Tarcala.

Brian Agerbak, general secretary of Badminton Europe added: "I am very happy that Malta is stepping forward and have the ambitions to organise a Congress, which is a big job for a small federation.

"It is a fantastic destination to go to and I am sure that all the members are to go to sunny Malta in April next year."

Tarcala and Agerbak conducted the virtual ADM directly from Kiev which is staging the European Badminton Championships.

Richard Vaughan, chair of high performance, and Andrej Pohar, chair of communication and media, were also re-elected as Board members on new four-year terms ending in 2025.

"I am happy that Andrey Antropov was re-elected," said Tarcala.

"Russia is a strong badminton country.

"Not only in terms of players but also in terms of organising our big events and activities which are important for us."

Badminton Europe’s judicial procedures are set to be replaced by new disciplinary and dispute resolution regulations after 40 members voted in favour and none against the move.

"This is important because with these new ways of doing it, dealing with our judicial procedures, we are aligning it with the rest of the badminton world," a spokesperson from Badminton Europe said.

"That means if particular offenses are happening in the badminton world they will be managed mainly by BWF [Badminton World Federation], which means it does not matter if it happens in Europe or in for instance Africa or Asia, they will be treated equally.

"We wanted to support that change from BWF, because we feel that it is important that all players are treated equally."

Members were also briefed on Badminton Europe’s new strategic plan which is set to outline the organisation’s vision, missions and priorities through to 2024 and is due to be unveiled shortly.

"It is important for us once in a while, typically every four or five years, to look at our strategic plan and look a bit ahead," said Agerbak.

"It is a rolling plan, so we look at it every year, but to set a direction like we did here, is exciting.

"We have an ambitious plan and some important topics we are looking at in the coming years.

"Governance is becoming more and more important these years.

"In high performance we have a big task ahead of us competing against the Asians.

"We need to be more entertaining with our sport, we need to support our members and make sure that development is happening in every member association, and we always will have to look at participation, making sure that the grassroots part of our sport is still doing well."