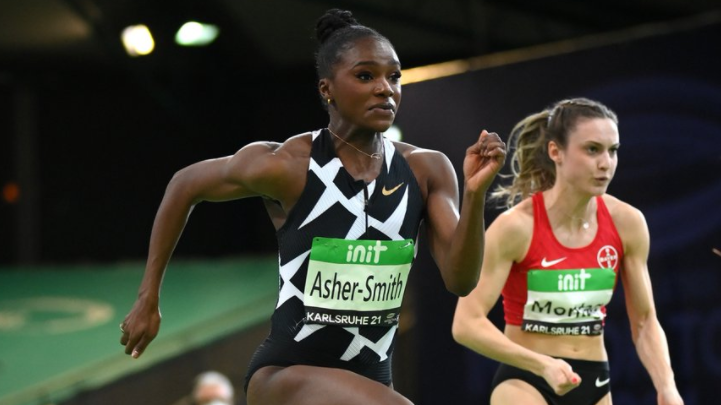 Britain’s world 200m champion Dina Asher-Smith equalled her British record of 7.08sec in winning the 60 metres at the first World Athletics Indoor Tour Gold meeting of the year in Karlsruhe on a night when France’s former world pole vault record holder Renaud Lavillenie looked back to his lofty best.

Despite not having competed indoors for three years, the 25-year-old Briton, who set her record in 2015, was never headed as she finished clear of France’s Orlann Ombissa-Dzangue, who clocked 7.16, and Switzerland’s Ajla Del Ponte, who equalled her personal best of 7.17.

Asher-Smith’s time in the Europa Halle replaced her own mark of 7.11, set in the heats, at the top of this year’s rankings and she will head on to the next World Indoor Tour meeting on Sunday (January 31) in Dusseldorf in buoyant mood.

Lavillenie - the London 2012 Olympic champion - had a frustrating year in 2020 as, hampered by elbow problems, he saw his 2014 world record of 6.16 metres beaten twice by the prodigiously talented Armand Duplantis, who raised it to 6.18m.

He's still got it!@airlavillenie shows why he's one of the all-time greats.

5.95m, a world lead and the @INDOOR_MEETING record.

But after matching his best ever season’s opener with 5.92m at the StarPerche event in Bordeaux, the Frenchman was full of confidence and won the event with just three, insouciant, first-time clearances at 5.62, 5.80 and then 5.88m before rounding off with a first time success at 5.95m.

That bettered his own 2016 meeting record, and established him at the top of this year’s world rankings ahead of US athlete K C Lightfoot, who cleared 5.94m in Lubbock, Texas on January 16.

The 34-year-old was fully entitled to roar in triumph before having two - unsuccessful - cracks at reaching his old familiar hunting ground of 6.00m - he will surely be back there very soon.

By the time he resumed to clear 5.80m easily at his first attempt only three rivals remained - Cole Walsh of the United States, Germany’s Torben Blech and another US athlete, Matt Ludwig, all of whom cleared 5.72m, a height that proved too much for Raphael Holzdeppe, the German who in Moscow eight years ago surprisingly beat Lavillenie to the world title he has still never won.

But Lavillenie’s effortless clearance at 5.88m sealed the deal with Ludwig the only other vaulter to clear at 5.80m.

Nooralotta Neziri produced one of the surprises of the night as she won the women’s 60m hurdles in a Finnish record of 7.92sec from lane eight - while the fastest finishers in the opening heats, in lanes four and five, found their battle was for second place.

When the gun went the focus was on Nigeria’s Commonwealth champion Tobi Amusan and the fastest woman in the heats, the Dutch European indoor champion Nadine Visser, who had clocked 7.98.

Amusan won the battle for runners-up position, clocking 7.94 ahead of Visser, who timed at 7.96.

Bethwell Birgen of Kenya produced an astonishing final surge to win the 3,000m in a personal best and 2021 world-leading time of 7min 34.12sec.

Birgen’s compatriot, the world 3,000m steeplechase champion and record holder Beatrice Chepkoech, was a serene winner of the women’s 3,000m in 8:41.99, the fastest 2021 time, after upping the pace following a slowish middle kilometre.

France’s Wilhem Belocian, who reduced his 60m hurdles personal best from 7.57 to 7.48 in the heats, carried through to win the final in 7.49.

Britain’s Elliott Giles finished four metres clear in the 800m, clocking 1:45.50 - the fastest recorded so far this year - after a smoothly efficient performance.

The women’s 1500m produced a surprise winner in Germany’s Katharina Trost, who clocked 4:12.02, the fastest so far this season, holding off Uganda’s Winnie Nanyondo, an 800m bronze medallist at the 2014 Commonwealth Games, who finished in 4:12.36.

Auriol Dongmo produced a Portuguese and meeting record of 19.65m in the opening event of the women’s shot put, with Sweden’s Fanny Roos setting a national record of 18.64m in second place.

Organisers required negative COVID-19 tests ahead of the competition for all involved, but did not insist on the seven-day quarantine required by other meetings in Europe.