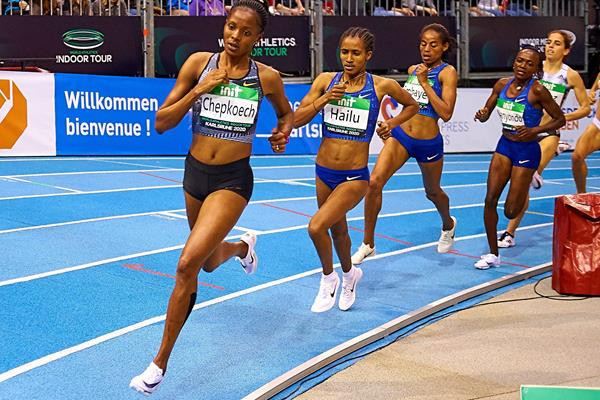 A high-quality line-up featuring several former world and Olympic champions has been assembled for the first World Athletics Indoor Tour Gold meeting of 2021 at Karlsruhe in Germany.

Action is taking place behind closed doors at the Europahalle in a bubble with the number of people allowed at the event capped at 200.

Of these, 120 are athletes and there is star quality wherever you look.

The women’s 3000 metres features current world champion Beatrice Chepkoech of Kenya, who will face tough competition from compatriot Gloria Kite and Fantu Worku of Ethiopia among others.

World 200m champion Dina Asher-Smith of Britain competes indoors for the first time in three years over the shortest distance – the 60m.

Among her rivals will be compatriot Asha Philip, the British record holder and fastest in the field.

2015 world champion Christina Schwanitz of Germany features in the line-up for the women’s shot put, where she will face a field including 2020 world leader Auriol Dongmo of Portugal.

In the men’s long jump, Juan Miguel Echevarria of Cuba returns to the scene of his first ever indoor long jump title.

Echevarria will hope to build on good memories from Karlsruhe in 2018 where he won at the venue aged 19, a month before he became world indoor champion.

The men’s 60m hurdles field is dominated by American and French athletes, with world indoor silver medallist Jarret Eaton of the United States and European champion Pascal Martinot-Lagarde of France among the competitors.

They are due to meet indoors for only the second time since the 2018 World Indoor Championship final, when Husillos crossed the line first but was disqualified for a lane violation, allowing Maslák to take gold.

The final scoring discipline in Karlsruhe is the women’s triple jump, with the field for this featuring North American record holder Tori Franklin of the United States, European champion Paraskevi Papachristou of Greece and European indoor champion Ana Peleteiro of Spain.

The first of these is the men’s pole vault featuring former world record holder Renaud Lavillenie of France and 2013 champion Raphael Holzdeppe of Germany among the field.

2017 world 800m champion Pierre-Ambroise Bosse of France makes a rare indoor appearance in the men’s 800m, and will be hoping to draw on good memories of this venue, where he set his indoor personal best in 2016.