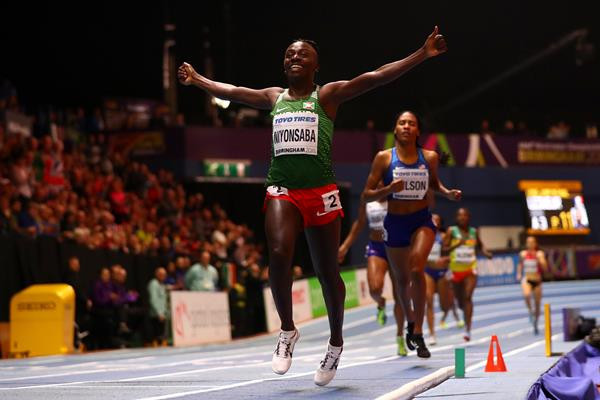 Human Rights Watch (HRW) has called for the end of sex testing from World Athletics, outlining how it violates the human rights of women in the Global South.

Finishing behind South Africa's Caster Semenya and ahead of Kenya's Margaret Wambui, the three athletes who made the podium at Rio 2016 have since been regarded by other athletes as having an unfair advantage.

All three have been found to be able to produce more testosterone than the average woman, but studies have both shown for and against the argument that it creates an unfair advantage.

The Court of Arbitration for Sport (CAS) ruled in favour of World Athletics' decision to require these athletes to artificially lower their testosterone through medication and was further backed by the Swiss Federal Supreme Court, who rejected Semenya's appeal.

Wambui won the bronze by just 0.13 seconds ahead of Canada's Melissa Bishop, who is regarded as not having the same testosterone levels as the three medallists.

Athletes suspected of having an advantage must undergo a sex test to determine whether the athlete is female including genitalia inspection and testosterone checks.

Niyonsaba gave a brief statement to open the meeting to share her experiences of undergoing sex testing, where she spoke about her disappointment over the Semenya case.

"They asked us to change our bodies to be able to run so I asked myself what kind of justice is this?" said Niyonsaba.

"We have been publicly humiliated, our right to privacy has been violated.

"It's not just about us, it's about the next generations.

"With no competition, we cannot get income.

"Sport has the power to change the world, we have to keep the fight alive ourselves."

Prior to Niyonsaba speaking, HRW showed a video of Ugandan runner Annet Negesa, who faces the same restrictions.

Experts were also present on the panel including Michael van Gelderen of the Office of the United Nations High Commissioner for Human Rights and Agnes Odhiambo, HRW senior women's rights researcher.

Odhiambo stated that this process was used to root out men from competing as women and that the procedure violates multiple human right issues.

She also explained that HRW documenting these abuses in their most recent report They're Chasing Us Away from Sport: Human Rights Violations in Sex Testing of Elite Women Athletes were first-hand testimonies while speaking to the athletes.

Criticism also came from Mitra who highlighted that World Athletics does not have similar regulations for men and that although the fair play argument was understandable, it did not make human rights violations acceptable.

"What we are talking about is making the field safer," said Mitra, speaking to insidethegames.

"That shouldn't be considered a bigger concern.

"Once someone becomes an athlete, human rights shouldn't be violated as soon as you enter the athletic field."

"The way that we speak about these issues as conflicting, needs to change."

So many mentions of testosterone as the male sex hormone related to Caster Semenya's case. It's inaccurate to call T the "male sex hormone." Here's why.

Karkazis, who has studied this issue for over a decade, said that the report shows violations to "privacy and dignity, issues to discrimination and also rights to lives and livelihood" while stressing that these individuals do not have a choice in the matter.

"What ends up happening is that in these regulations these 'choices' given to women are impossible," said Karkazis.

"Including genital exams to determine whether they are naturally produced or doping.

"For one to compete, one must submit themselves to these kinds of exams.

"The feeling of unfairness does not amount to a violation of rights and what we have is a clear violation of women in the Global South and these athletes are now in limbo.

"There is no clear consistent evidence that testosterone levels are performance enhancing and contrary to some evidence put forward by World Athletics.

"There are complex patterns between testosterone and athletics so without that scientific basis between them there is no scientific evidence."

The Global South relates to nations often regarded outside of the "Western" world, covering Belarus, Ukraine, Latin America, Africa, most of Asia and the Pacific Islands.

The Global North refers to the United States, Canada, most of Europe, Israel, Japan, South Korea, Australia and New Zealand.

"Gender is always racialised and women are expected to conform to certain standards," she added.

Karkazis suggested that athletes were often discriminated against due to their appearance.

She also stressed that moving away from this framework would also benefit women in Global North countries.

Karkazis mentioned that fairness in sport was only focused on in regards to testosterone, stating that conversations changed the argument as these women being powerful, rather than having their human rights violated.

Athletes like Semenya and Niyonsaba have been forced to take medication if they wish to continue running between the distances of 400m and two miles.

Niyonsaba is reportedly moving to the 5,000m while Semenya could be looking to compete in the 200 metres at the re-arranged Olympics in Tokyo last year following her appeal being rejected.

In response to the report published by HRW, World Athletics released a statement criticising the organisation for not approaching them for comment, while also reiterating its commitment to women in sport.

"This report was not written by independent and impartial experts, but rather by advocates for one side of the argument," a spokeswoman said.

"World Athletics was not asked to provide a response to these allegations as part of the report, which would have provided much-needed balance on this very complex issue.

"We remain committed to fairness for women in sport and reject the allegation that biological limits are based on race or gender stereotypes.

"On the contrary, they provide an objective and scientific measure to define the category, and are a necessary, reasonable and proportionate means of attaining what both the Court of Arbitration for Sport and the Swiss Federation Tribunal agreed was a legitimate objective, namely preserving fair and meaningful competition in the female category."

"The working group is supported by the Centre for Sport and Human Rights and Shift," added the statement.

"Human Rights Watch is well aware of this ongoing work as it took part in the most recent meetings of the working group."