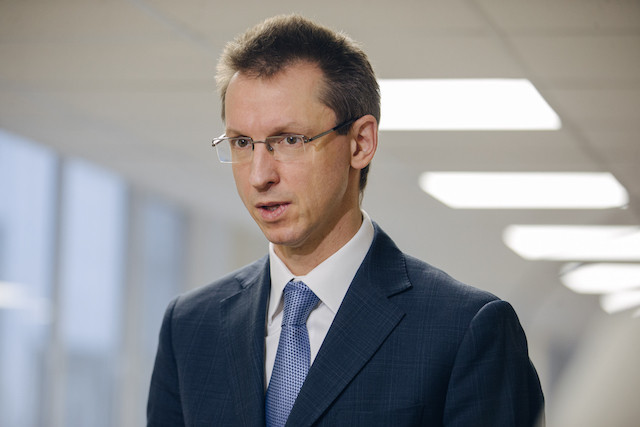 Ivanov, winner of the RusAF election in Moscow yesterday with 56 of the 73 votes, held talks with the Taskforce, chaired by Norwegian Rune Andersen, before the first day of the virtual World Athletics Council meeting which started today.

Ivanov, also currently the head of the Russian Triathlon Federation and director general of High-Speed Railways, refused to divulge what was discussed and would only confirm that the meeting had taken place.

But he has already made it clear having Russia’s membership of World Athletics restored, after five years suspension following allegations of state-sponsored doping, is his number one priority.

"Taking into account the situation with the restoration of the image and trust in ARAF [RusAF], the tasks are divided into two parts: the external circuit -  this is interaction with the working group and World Athletics - and the development of athletics in the country," Ivanov told Russia’s official state news agency TASS.

"I can promise to do everything possible to restore what happened in the shortest possible time."

Russia’s Sports Minister Oleg Matytsin claimed that Ivanov’s election represented a turning point for the sport in the country after it has been forced to miss the 2016 Olympic Games in Rio de Janeiro and the 2017 and 2019 World Athletics Championships in London and Doha, respectively due to the ban.

"He is a person with extensive experience in managing and working with international sports organisations," Matytsin told TASS.

"He and his team have a responsible task to resolve the crisis that has developed in Russian athletics in recent years, and to restore full membership of ARAF in World Athletics.

"The Russian Ministry of Sports, for its part, will continue cooperate and support the federation within its competence.

"The Ministry advocates the creation of a modern system for the development of athletics, combining mass and professional components into a single whole, protecting the interests of Russian athletes and restoring their right to participate in international competitions."

Stanislav Pozdnyakov, President of the Russian Olympic Committee, also expressed confidence in Ivanov and his ability to cure the sport’s problems.

"I am sure that the new leadership of ARAF has the necessary professional skills, experience and resources to solve them," he told TASS.

However, not everyone was so confident that Ivanov could restore athletics’ future in Russia.

High jumper Ilya Ivanyuk, bronze medallist at the 2019 World Championships, admitted that, after so many false dawns and the promises of previous administrations, many athletes remained sceptical about whether Ivanov could help them.

"I published a survey on my page on the social network, what awaits us in the future with this person, but many of my colleagues reacted very pessimistically," Ivanyuk told TASS.

"But I think that Peter Ivanov should be given a chance.

"I really want to believe in the best, but the bitter experience of failures of the former leaders of the Federation does not strongly inspire for a bright future.

"I am very cautiously optimistic about the results of the elections.

"The light of faith in a bright future in me is barely burning, not quite extinguished."

Ivanyuk, like many other top Russian athletes, will be hoping that the election of Ivanov will help persuade World Athletics to restore the Authorised Neutral Athlete (ANA) programme.

The ANA scheme allows Russian athletes to compete internationally but not under their own flag.

The programme has been suspended since March but is among the topics being discussed at this week’s World Athletics Council meeting.