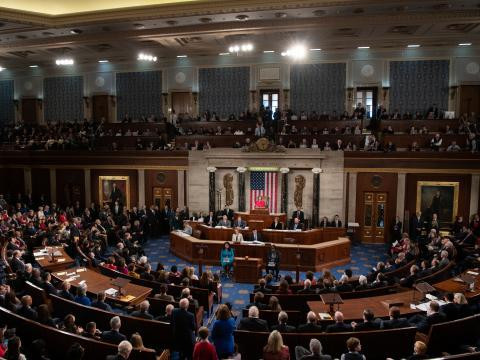 A Bill which could put the United States Olympic and Paralympic Committee (USOPC) on a collision course with the International Olympic Committee (IOC) has been unanimously approved by Federal lawmakers.

The United States House of Representatives in Washington D.C. today passed the "Empowering Olympic, Paralympic and Amateur Athletes Act of 2020", which grants Congress the power to remove members of the USOPC Board of Directors.

The Bill, which will now be sent to US President Donald Trump for signature before October 13, also means Congress can decertify national governing bodies in the country if they fail to adhere to the Act.

Although mainly focused on protecting athletes in the wake of the sexual abuse scandal at USA Gymnastics, the Bill has already caught the attention of the IOC, which strictly prohibits Government interference in its National Olympic Committees.

The IOC has previously raised concerns over the Bill, while USOPC chief executive Sarah Hirshland also warned of the consequences for the organisation and the country's athletes if it were to come into law.

The USOPC has since dropped its opposition to the bill, spearheaded by Senators Jerry Moran and Richard Blumenthal.

In a statement sent to insidethegames, the IOC said it would "study and discuss the national legislation in detail" with the USOPC "to learn about their evaluation of this law".

The parts of the act concerning the USOPC Board and NGBs could come into effect as early as October 13 of next year, raising the possibility of the IOC suspending arguably the biggest NOC in the world less than six months before the opening of the 2022 Winter Olympic Games in Beijing.

"Team USA athletes had a big win in the halls of Congress today with the passing of the Empowering Olympic, Paralympic, and Amateur Athletes Act," Hirshland said in a statement.

"It will cement increases in athlete representation in the U.S. Olympic and Paralympic Movements, improvements in athlete safety protections, and bolster transparency and accountability in our system.

"The USOPC Board has already approved two of the most sweeping governance reform updates in recent history, and a third phase is before the Board this fall.

"This legislation codifies many of those reforms, with the USOPC now positioned to move quickly to address any outstanding provisions and support the work of the Commission.

"This Bill underscores the value and necessity of the athlete voice and engagement in building stronger, and better, Olympic and Paralympic movements for current and future generations."

The IOC has suspended countries including Kuwait and India over Government interference in the past, and its President Thomas Bach sent another warning to Italian officials this week because of a controversial sports law in the nation.

While it seems unlikely the IOC will move to suspend the US, parts of the Bill appear to contravene the Olympic Charter.

IOC rules state the IOC Executive Board can take action, including suspension, "if the constitution, law or other regulations in force in the country concerned, or any act by any Governmental or other body, causes the activity of the NOC or the making or expression of its will to be hampered".

The USOPC is the largest benefactor from the IOC among the 206 NOCs.

The Bill may also see the formation of a 16-member commission on the State of the U.S. Olympics and Paralympics in the near future,

It also requires the USOPC to give the US Center for SafeSport $20 million (£15.5 million/€17 million) in annual funding to do its work more effectively.

Many of the reforms outlined in the bill have either been implemented or are in the process of being implemented by the USOPC, which came under fire following the sexual abuse scandal involving disgraced USA Gymnastics team doctor Larry Nassar.