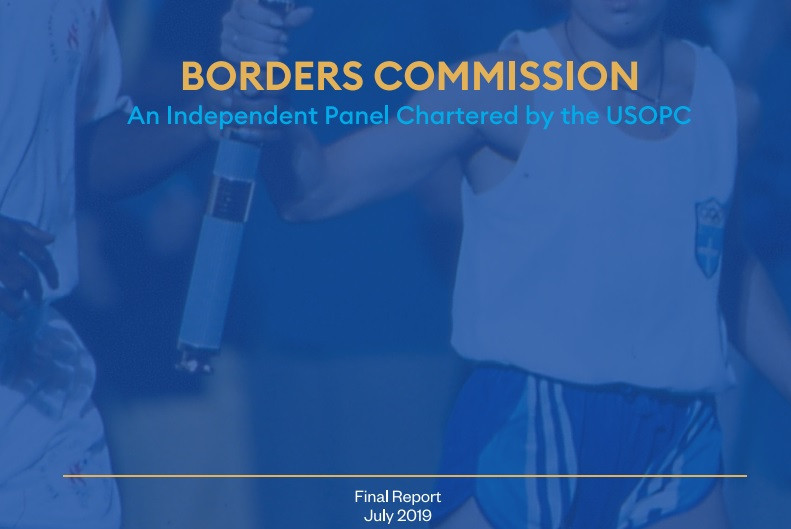 Overhauling the structure of the United States Olympic and Paralympic Committee (USOPC) Board to increase athlete representation and changing the general culture of the organisation are among the key recommendations made in the final report from the Athlete and National Governing Body Engagement Commission.

The report from the group, known as the Borders Commission, was published this week after it conducted a nine-month analysis of the USOPC following a series of scandals which have rocked sport in the US.

It said the Board should include at least three members of the Athletes' Advisory Council (AAC) and two further athlete representatives who would be eligible to serve on the AAC but for the 10-year rule.

The 10-year regulation requires that a competitor must have participated at an Olympic or Paralympic Games, Pan American Games or "Operation Gold" events within the preceding decade to be able to be an AAC member.

At least three of the Board members should be "elected and re-elected"by the NGBs, while at least five independent directors must also sit on the USOPC's ruling body.

American International Olympic Committee members must also remain on the Board, the Commission said, but should not vote on matters where there could be a conflict of interest.

The Borders Commission set a target of June 2024 for the implementation of the new Board.

The Commission - established by the USOPC to evaluate the structure of Olympic and Paralympic bodies in the US, with a particular focus on how it interacts with the organisations - urged the USOPC to appoint a chief compliance officer and Compliance Committee.

Developing a more robust and comprehensive whistleblower policy and reporting system would be among the roles of the chief compliance officer, which should be hired by December of this year.

It also recommended each USOPC committee, working group and task force be comprised of at least 20 per cent athletes.

The group suggested the USOPC relinquish its control of the AAC bylaws to increase the separation and independence of the bodies.

Changing the NGB funding paradigm to "go beyond only providing funds for competing elite athletes and NGBs that the USOPC deems likely to win medals in the next Games" was among the other recommendations.

The report warned that, more generally, the USOPC "must change in order to build the trust of athletes", which some competitors have lost following the Larry Nassar sexual abuse scandal.

It noted how the USOPC should "engage a third party to conduct an annual assessment of its culture to monitor the evolution toward a more athlete-centric one and assess how the organisation’s culture is aligning with its stated mission".

"Most of the athletes and many other interviewees expressed significant and serious concerns about possible retaliation for helping the Commission," the report added.

"Such fears highlight a lack of trust relative to the USOPC of the recent past and the NGBs."

In response, USOPC chief executive Sarah Hirshland claimed the organisation had already begun its reform efforts and vowed to action the recommendations made by the commission.

"As we remain laser-focused on prioritising and supporting the needs of athletes and NGBs, we must set clear standards of organisational excellence and hold ourselves and all member organisations accountable," Hirshland said.

"With changes to governance and personnel, policies and procedures – and most importantly, culture – we are a very different organisation than we were one year ago, but we have more work to do.

"We remain committed to that reform process and will share information about additional actions we are taking as a result of these recommendations."