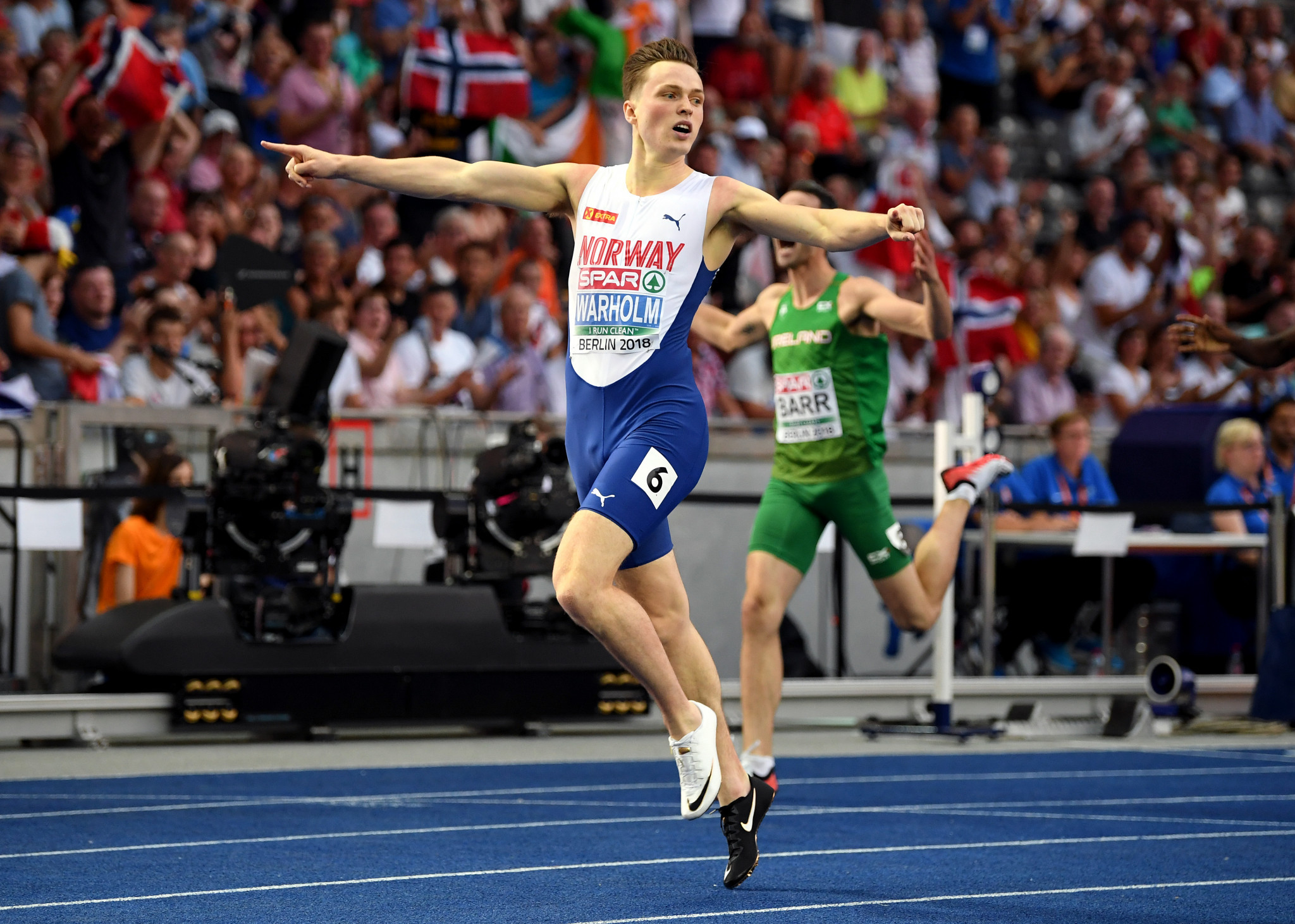 Tomorrow's Golden Spike meeting in the Czech city of Ostrava features a fresh world record holder in Sifan Hassan, but the keener focus will be on two athletes teetering on the brink of setting new global marks – Karsten Warholm and Ryan Crouser.

The presence of this trio will make the latest stop on the World Athletics Continental Tour Gold programme required viewing for worldwide audiences and the 5,000 spectators who will be allowed into the stadium under the current restrictions on public gatherings in the Czech Republic.

Had Warholm not hit the final barrier at last month's Diamond League meeting in Stockholm he might have beaten Kevin Young's world 400 metres hurdles world record of 46.78sec, set at the 1992 Barcelona Olympics, but he had to settle for the second-fastest time ever run – 46.87.

Now, Norway's 24-year-old double world champion will refocus on surpassing one of the sport's longest-standing marks.

Crouser, the Rio 2016 shot put champion, has been the only man over 22 metres this season, setting a personal best of 22.91m that is just 21 centimetres shy of the 1992 world record of 23.12m set by his American compatriot Randy Barnes.

World record peaks are often reached after the establishment of a high level of consistency, and in recent weeks the 27-year-old from Portland, Oregon has put together an awesome sequence of throws.

His last two competitions in Des Moines and in Chorzow yesterday produced one foul and 11 efforts beyond 22m.

Crouser said jetlag left him a little sluggish for the Chorzow meeting, his first of the season outside the United States.

That bodes well for his next competition, where Italy's Leonardo Fabbri and Poland's European champion Michal Haratyk, currently second and third on the season's list with 21.99m and 21.88m respectively, are once again present.

Hassan, the reigning 1500 and 10,000m world champion, will race over 5,000m just four days after breaking the world record in the one-hour run at the Diamond League fixture in Brussels.

Having reached 18,930m in her 60-minute effort, beating the previous mark of 18,517m set by Ethiopia's Dire Tune in Ostrava in 2008, the Ethiopian-born Dutch athlete is now targeting – for starters – the meeting record of 14min 30.18sec set by Meseret Defar of Ethiopia in 2007.

While the Ethiopian-born Dutch athlete holds the European record of 14:22.12, she may be tested by the 21-year-old Ethiopian Tsehay Gemechu, who finished fourth at last year's World Championships in a personal best of 14:29.60, and Turkey's Yasemin Can, who has a best of 14:36.82.

That said, the most intensely competitive event of the meeting is likely to be the men's triple jump, which brings together three huge talents in the shape of Burkina Faso's French-based world bronze medallist Hugues Fabrice Zango, Portugal's double world silver medallist Pedro Pablo Pichardo and world and Olympic champion Christian Taylor of the US.

Taylor prepared for his first big international meeting of the season in Hungary last month by competing in the National Championships of Austria – where he is currently training and studying.

He produced an effort of 17.34 metres at the Continental Tour Gold meeting in Szekesfehervar, putting him second in this season's world list, but had to give best to Zango, who reached 17.43m, with Pichardo third on 17.28m.

The men's 1500m promises another compelling spectacle, with Norway's 19-year-old European champion Jakob Ingebrigtsen, who has already set a European record of 3:28.68 this season, opting for another swift run on a track with a swift reputation.

Britain's European 1500m champion Laura Muir, who has produced the season's two fastest performances in the metric mile, will step down to the 800m, at which she has already clocked 1:59.54 this season.

Her opponents will include Ireland's Ciara Mageean, who has run a personal best of 1:59.69 this year, and Poland's European 1500m silver medallist Sofia Ennaoui, who produced her first sub-4:00 minute 1500m in Chorzow yesterday as she clocked 3:59.70 behind Muir.

Sweden's world discus champion Daniel Stahl will seek his 14th consecutive win, while in the women's javelin Maria Andrejczyk, who won in Chorzow with a season's best of 65.70 metres, will face 39-year-old home legend Barbora Spotakova, the double Olympic and three times world champion who is also world record holder.

Double pole vault world champion Sam Kendricks, who could only manage 5.72 metres in Chorzow yesterday for second place behind home athlete Piotr Lisek, will seek to regain the 6.02m heights he reached in Lausanne last week as the American pushed world record holder Armand Duplantis to a clearance of 6.07m.