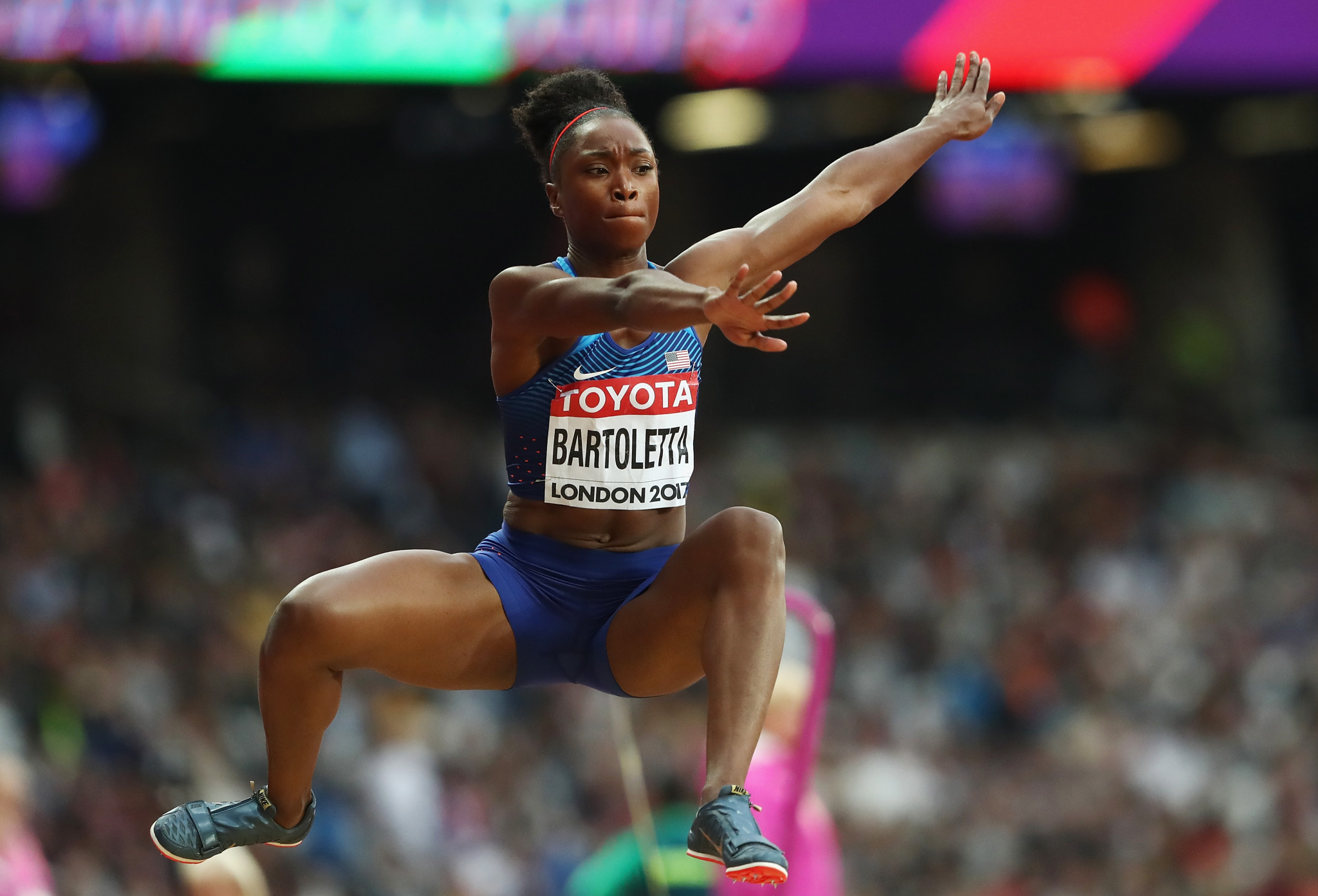 American three-time Olympic champion Tianna Bartoletta has hit out at her compatriot Christian Coleman for his attitude towards a provisional anti-doping suspension.

Bartoletta, who won gold in the long jump and 4x100 metres relay at Rio 2016 and the same relay medal at London 2012, said Coleman's actions lacked "professionalism" and "responsibility".

Coleman is facing the potential of a two-year ban for missing three anti-doping tests in a 12-month period, which would see the American miss the Tokyo Games, now postponed to 2021.

In response, Coleman has criticised the system whereby athletes are required to give their whereabouts for an hour each day.

Coleman has been the fastest man in the world over 100m since 2017 and had been viewed by some as the successor to Usain Bolt as the face of athletics.

In 2018, Coleman broke the 60m indoor world record at the United States Indoor Championships in Albuquerque in 6.34 seconds.

However, this is not the first time he has faced an anti-doping ban, having been suspended by the United States Anti-Doping Agency ahead of the 2019 World Athletics Championships being getting away without a ban on a technicality.

"There may be a lot happening right now, but no, I have not forgotten about you, Christian Coleman", wrote Bartoletta in a scathing post.

"I was just addressing other issues first, but I have a bit of breathing room now and as much as it pains me to this, especially to a fellow Tennessee Volunteer, during an already tumultuous time for everyone but especially people of colour...

"You have pissed me off.

"Because you were given a scare before, and an opportunity to learn from that and do better - and you didn't.

"We are in a unique position to be able to utilise our physical gifts in a way that allows us to get paid, allows us to have a platform, allows us to run ourselves into the lives we want to have - especially you, making a reported seven figures from the same sponsor I have.

"I do this to send a message to my shoe sponsor and anyone that cares that I'm worthy of the investment, that I won't be reckless with their belief or their support.

"That means I train my ass off; I compete to the best of my abilities; I don't act a damn fool publicly or on social media; I don't embarrass myself, my sponsor, or my family when I speak or write.

"I eat well, I sleep well, I take no supplements and I comply with my whereabouts."

Bartoletta continued: "Contrary to Miss Salwa Eid Naser says, missing three drug tests in a year is NOT normal because it's NOT ALLOWED TO BE.

"I concede that missing drug tests do happen, I missed a drug test in February just before the shutdown.

"I had forgotten to update my whereabouts because I was rushing to get to the Olympic Training Center in Colorado Springs on Super Bowl Sunday after my TUE [Therapeutic Use Exemptions] for a Blood Transfusion was approved by World Athletics.

Bartoletta explained that she appealed the decision based on evidence of where she was, as well as handing over blood and urine samples, rather than attacking the anti-doping system.

"My appeal started this way: 'I failed to update my whereabouts, and for that reason a missed test is an appropriate charge however, I am clean, and can prove it- if you allow me to'.

"'If it is more important to punish me for lack of compliance I understand, but if it’s about making sure I’m clean I can prove it'

"As annoying as things like this are, it is a mild inconvenience compared to what one stands to lose by NOT doing it.

"We have a 60 minute window: set yourself up for success by making the window 6am-7am.

"Copy and paste that window to every day of the quarter, do the same for your training time and location, make sure your home address is your overnight location.

"Sometimes the night gets interesting and you’re not sleeping in your own bed, and it might be weird to ask for their exact address while they watch you text it to some mysterious entity…in which case you log on to the portal, select quick update: tell the damn truth, add a phone number, change your 60 minute window, and get home in time for that."

"Christian, you earned that World Record in the 60 meter dash, and I celebrated for you when it was ratified," she wrote.

"When our 2012 4x100 meter relay team broke the World Record at the London Olympics and we were waiting to get drug tested I knew that from that day forward I would NEVER do anything, be it missing too many tests or taking a supplement that could jeopardize that record, not just for myself, but for my team, and my country.

"The weight of the responsibility, the loyalty to my teammates, the hope of my sponsors, the pride of my friends and family keep me on point.

"And perhaps that’s too esoteric a view for some… so let’s try this.

"We get to run track for a living.

"And sure, there are no sports really happening right now, but most of us haven’t missed a check in a time when so many people have.

"And although it may feel like I’m picking on you, it’s bigger than you.

After a close call last year for 3 whereabout failures or missed tests, for Coleman to allow this to happen again will lead people to believe either you’re doping or you don’t take seriously the anti-doping efforts of the sport. What reason do we have to believe otherwise? https://t.co/B5GOkCucfL

"You’re not the only one.

"Hell, you’re not the only American, you’re not even the only recent world medalist in this position right now.

"But you are the biggest fish in this pond.

"The recklessness with which some of us approach this sport that is already on life support due to mishandling by upper management (to put it nicely), doping scandals, and dwindling competitive opportunities proves that we aren’t taking its integrity too seriously either? Are we?

"We teach people how to treat us and this amateurism, this entitled approach to rule bending, isn’t how we get Lord Coe and his cronies to stop treating us like 'daddy knows best'.

"To be clear, I don’t think you’re a cheat, but we’ve all been cheated - potentially cheated out of the opportunity to see you run another world record, contribute your efforts to an Olympic relay, see how you develop, to rally behind something good coming out of America.

"Athletes, your body of work needs to mean more to you than your shopping list and I’m not trying to play this 'what about' game, I don’t care.

"None of that whataboutism is within my control, but you know what is?

As well as being a three-time Olympic champion, Bartoletta also holds two world titles in long jump and finished third on the podium in her first bobsleigh World Cup event in 2012.

Others, including US Olympic legend Michael Johnson, have also been critical of Coleman's attitude and actions.