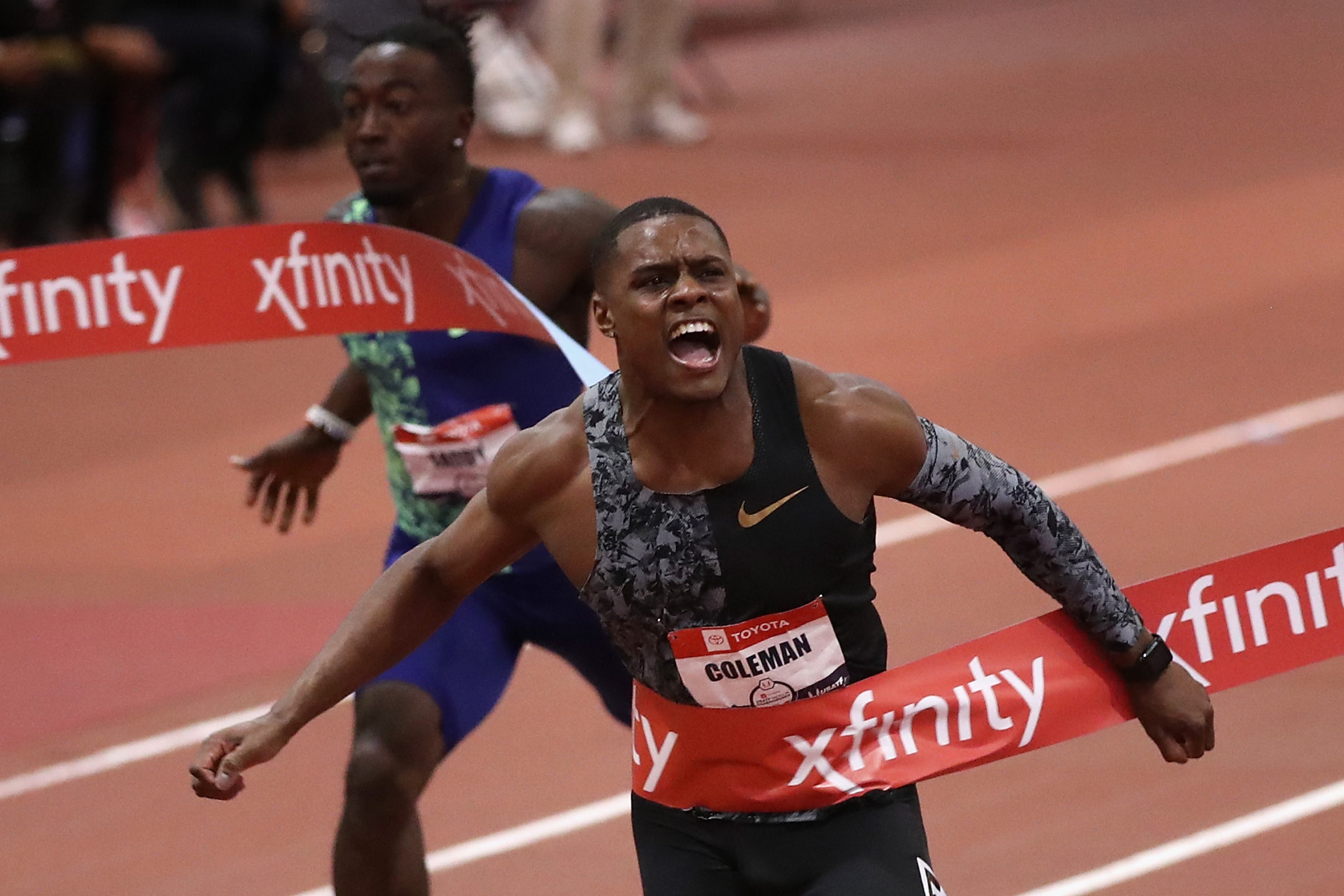 World 100 metres champion Christian Coleman could be banned from the Tokyo 2020 Olympics after he missed a drugs test in December, prompting a provisional suspension.

The American, who escaped a ban after three missed tests across 2018 and 2019, posted an image of his unsuccessful test report on Twitter.

He is now facing a two-year ban for three missed tests within 12 months, which would rule him out of the re-arranged Olympic Games next year.

It has been confirmed that he has been charged and provisionally suspended by the Athletics Integrity Unit (AIU).

Coleman, the fastest man in the world for the past three years, escaped punishment last year after missing tests on June 6 2018 and January 16 and April 26 of 2019.

Missing three tests in 12 months is the equivalent of a doping failure, but the sprinter successfully argued that the 2018 case, a filing error, should be pushed back to the first day of the quarter, April 1, and subsequently out of the year-long window.

However, if the December failure is confirmed the January and April cases will come back into play and mean that three tests have been missed in 12 months.

Coleman, who after avoiding a ban last year went on to win gold in the 100m and 4x100m relay at the 2019 World Championships in Doha, acted defiantly when he was cleared last time.

In a statement on the latest revelation, he once again took aim at the United States Anti-Doping Agency (USADA) and the AIU.

"A few days ago, the AIU came to a decision that I've been appealing for six months that I missed a test on December 9, 2019," he said.

"And now this might result in me being suspended from other filing failures that occurred well over a year ago at this point.

"Don't tell me I 'missed' a test if you sneak up on my door (parked outside the gate and walked through...there's no record of anyone coming to my place) without my knowledge.

"Knocked while I was Christmas shopping five mins away at the mall (I have receipts and bank statements) and didn't even bother to call me or attempt to reach me.

"I was more than ready and available for testing and if I had received a phone call I could have taken the test and carried on with my night.

"The AIU has to stop playing man.

"Two days later they came back to test me and followed the normal protocol and called and of course there were no issues with my test.

"I think the attempt on December 9 was a purposeful attempt to get me to miss a test."

Coleman is the current favourite for the Olympic title at Tokyo 2020, which was pushed back due to the COVID-19 crisis.

"I have never and will never use performance enhancing supplements or drugs," Coleman added.

"I am willing to take a drug test every single day for the rest of my career for all I care to prove my innocence.

"I support USADA, WADA (World Anti-Doping Agency) and the AIU to keep athletes and competition clean and fair.

"But the system must change.

"I thought the point of the organisation was to keep the sport clean by testing everyone and catching cheaters.

"Not attempt to catch people when they're not home and make no attempt to actually test them and mess with the livelihoods of people who are clearly not doping.

"The sport is in trouble and needs some sort of reform."

The AIU told insidethegames it would not comment on an ongoing case but they did note its procedures for out-of-competition testing, which are in conflict with Coleman's claim that he should have received a phone call.

"Athletes included in the World Athletics International Registered Testing Pool must provide a 60-minute time slot (at any time between 5am and 11pm) and a specific location where they will be available for testing on any given date," the AIU said.

"Athletes are accountable for a missed test if they are not available at the specific location they have chosen for that one hour period.

"Testing conducted by the AIU is on a no-advanced notice basis and instructions not to make any phone call to an athlete are given to doping control officers by the AIU, with limited exceptions.

"Any advanced notice of testing, in the form of a phone call or otherwise, provides an opportunity for athletes to engage in tampering or evasion or other improper conduct which can limit the efficacy of testing.

"When an athlete is not present at the location they have specified during the designated 60-minute time slot, doping control officers are instructed to remain at the location for the full 60 minutes.

"The World Anti-Doping Agency's International Standard for Testing and Investigations and the associated guidelines make it expressly clear that (i) a phone call is discretionary and not a mandatory requirement, and (ii) proof that a telephone call was made is not a requisite element of a missed test and the lack of any telephone call does not give the athlete a defence to the assertion of a missed test."

When asked for comment by insidethegames, USADA said: "We can confirm the latest proceeding involving Mr. Coleman and we are collaborating with the AIU on the matter.

"As in all cases, a person charged with a potential anti-rule violation is presumed innocent unless and until found to have committed a violation through the established process."