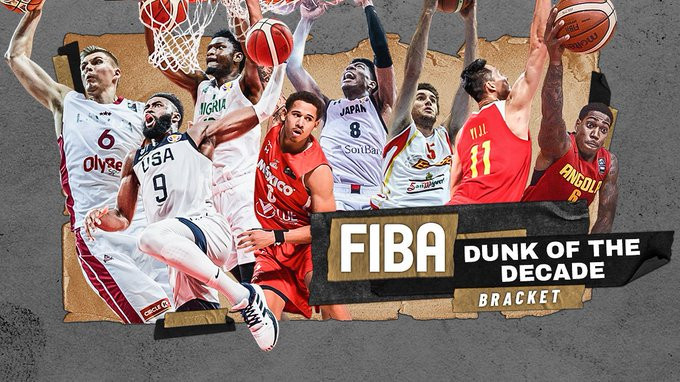 Fans have been asked to select the best slam dunk from FIBA's national team competitions over the past 10 years.

Featuring the most memorable dunks of the period between 2010 and 2020, the voting includes a total of 32 entries from a wide range of global and continental competitions, with all FIBA regions represented.

Voting began yesterday, with dunks from Africa, Americas, Asia Oceania and Europe competing against each other in regional conferences before converging for the final four round.

The bracket will culminate with the final, which is set to conclude at the end of June 28.

VOTE for your Dunk Of The Decade ⤵️

Fans participating in the voting will have a chance to win an official FIBA ball, with the winner of the fan competition to be announced following the conclusion of the Dunk of the Decade contest.

The competition has been organised during the suspension of sport due to the coronavirus pandemic.

FIBA has already launched a digital campaign titled "FIrstBAsket" with the aim of uniting the basketball community during the crisis.

The campaign features a series of videos, photos and interviews with basketball and 3x3 basketball players, coaches and officials.