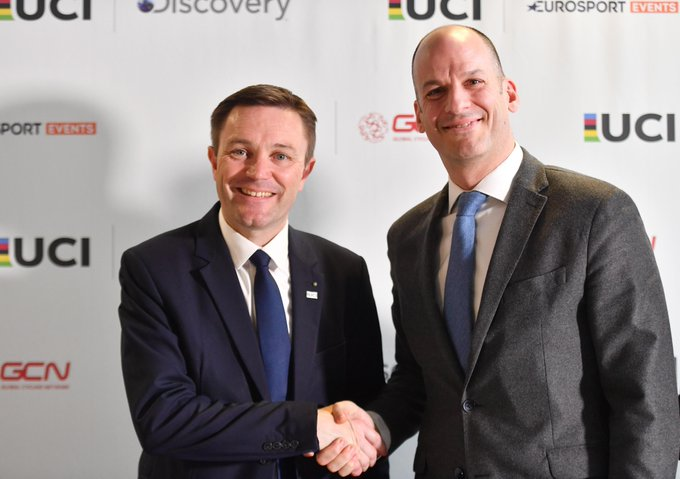 An International Cycling Union (UCI) Track Cycling World League will launch for the 2021-2022 season, following an agreement signed by the governing body and Discovery.

The series is the latest step taken by the UCI in its overhaul of track cycling, which was announced last September.

The reforms included the existing Track Cycling World Cup circuit dropping in size from six events to three from the 2020-2021 season, while being renamed the UCI Nations’ Cup.

Events will take place between July and September instead of October and January, with only national teams able to compete.

Each meet will take place in a different region of the world.

The UCI Track World Championships was also moved from its traditional slot of March to October.

The latest step sees the introduction of a UCI Track Cycling World League, which the UCI claims will be a short, dynamic and attractive format, which is perfectly suited to the needs of television and its viewers.

The competition programme for the new league will feature individual sprint, keirin, an elimination race and a scratch race for both men and women.

It is claimed the series will make track cycling more accessible and to open it up to new audiences.

The inaugural season will run from November 2021 to February 2022, following the 2021 UCI Track Cycling World Championships.

Six rounds will be held, with each running for around two hours.

The UCI said deepening its long-term relationship with Discovery will enable the event to benefit from extensive media platforms and promotion expertise to help grow cycling.

Management, television production and distribution of the new UCI series will be entrusted to Global Cycling Network (GCN), in collaboration with Eurosport’s dedicated event promotion division, Eurosport Events, for an initial term of eight years.

The partnership will ensure extensive international exposure for the Track Cycling World League, the UCI claims.

Exposure will come through via Discovery channels and platforms including Eurosport and GCN.

“I am thrilled and delighted that Discovery will be by our side to help launch and promote our new UCI Track Cycling World League,” said David Lappartient, UCI President.

“Their expertise and recognised know-how in the fields of organisation and television production and broadcasting will contribute significantly to the development and popular appeal of track cycling.

"With this new UCI circuit, the discipline will have a packed and attractive annual calendar that offers variety and will meet the expectations of new audiences while also appealing to existing cycling fans.

“Along with our new partner, we will grow the appeal of track cycling beyond the Olympic Games, where it has been on the programme since the very first Games of the modern era, in 1896.”

Participants will wear jerseys inspired by their national flags, while the UCI world champions will wear their rainbow jerseys for the occasion.

Riders will be able to collect UCI points according to a points scale similar to that used at the World Championships, while they are also expected to compete for prize pots on top of their participation bonuses.

Riders finishing in the top three in each event in the circuit’s final overall standings will qualify by name for the UCI World Championships, should their nation fail to qualify.

Eurosport, which has broadcast the UCI Track Cycling World Cup and World Championships for more than 25 years, currently shows more than 2,500 hours of coverage across 200 days of live cycling.

“We are excited to deepen our longstanding relationship with the UCI and go even further to grow the sport across Europe," said Andrew Georgiou, President of Eurosport and Global Sports Rights and Sports Marketing Solutions.

“Eurosport Events is an increasingly important strategic offer within our business, affording rights-holders the opportunity to build and strengthen their event portfolios globally.

“The partnership with the UCI demonstrates what the scale and expertise of the wider Discovery family can offer partners in sport, providing both highly localised content to the widest variety of audiences as well as offering unrivalled expertise, analysis and storytelling from the best experts.

“Combining this strength in cycling with Eurosport Events’ promotional know-how and the global scale of Discovery’s channels and platforms, including Eurosport and GCN, we are confident we will build the UCI Track Cycling World League into a huge success.

“As home of the Olympics in Europe, Discovery and Eurosport look forward to continuing to champion the riders who will be the stars of the velodrome all the way to Paris 2024.”