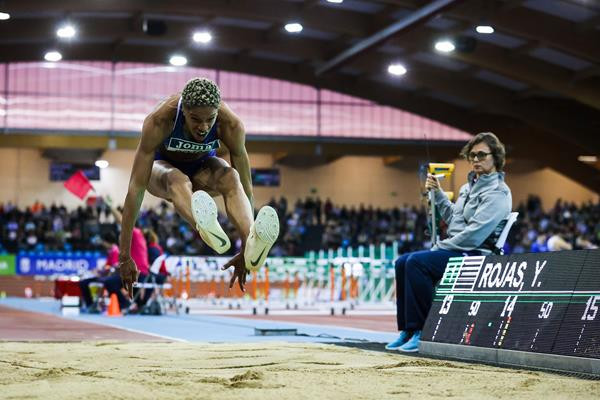 Having set a South American record and moving to second on the all-time indoor jump of 15.29 metres in the fourth round at Polideportivo Gallur, the two-time world champion went even further with her final effort of the competition.

Rojas leapt out to 15.43m, adding seven centimetres to the record held since 2004 by Russia's Tatyana Lebedeva.

It was also two centimetres farther than Rojas' outdoor personal best and is the absolute second-best triple jump performance, indoors or outdoors, behind only Ukraine's Inessa Kravets, who jumped 15.50m at the World Championships in Gothenburg in 1995 - the year Rojas was born in Caracas.

"I’m over the moon; I can’t believe I’m the world record-holder," said the 24-year-old Rojas.

"I want to get home and cry.

Yulimar Rojas in full flow on her way to breaking the triple jump world indoor record?

"I need to cry to release the adrenaline I have right now.

"I thought the record was definitely in my legs."

It was the third world record set during this year's World Athletics Indoor Tour following the two pole vault marks established by Sweden's Armand Duplantis in Torun and Glasgow earlier this month.

Burkinabe Hugues Fabrice Zango had been optimistic of challenging the men's world record in the triple jump but was not at his best, although he still won with an effort of 17.31m in the final round.

World indoor long jump champion Juan Miguel Echevarria closed the meeting with victory in his event by leaping 8.41m with his every last attempt.

Notable performances on the track included Ronnie Baker of the United States, winning the men’s 60 metres  in 6.44sec and Poland’s Justyna Swiety-Ersetic taking the women’s 400m in 51.93.