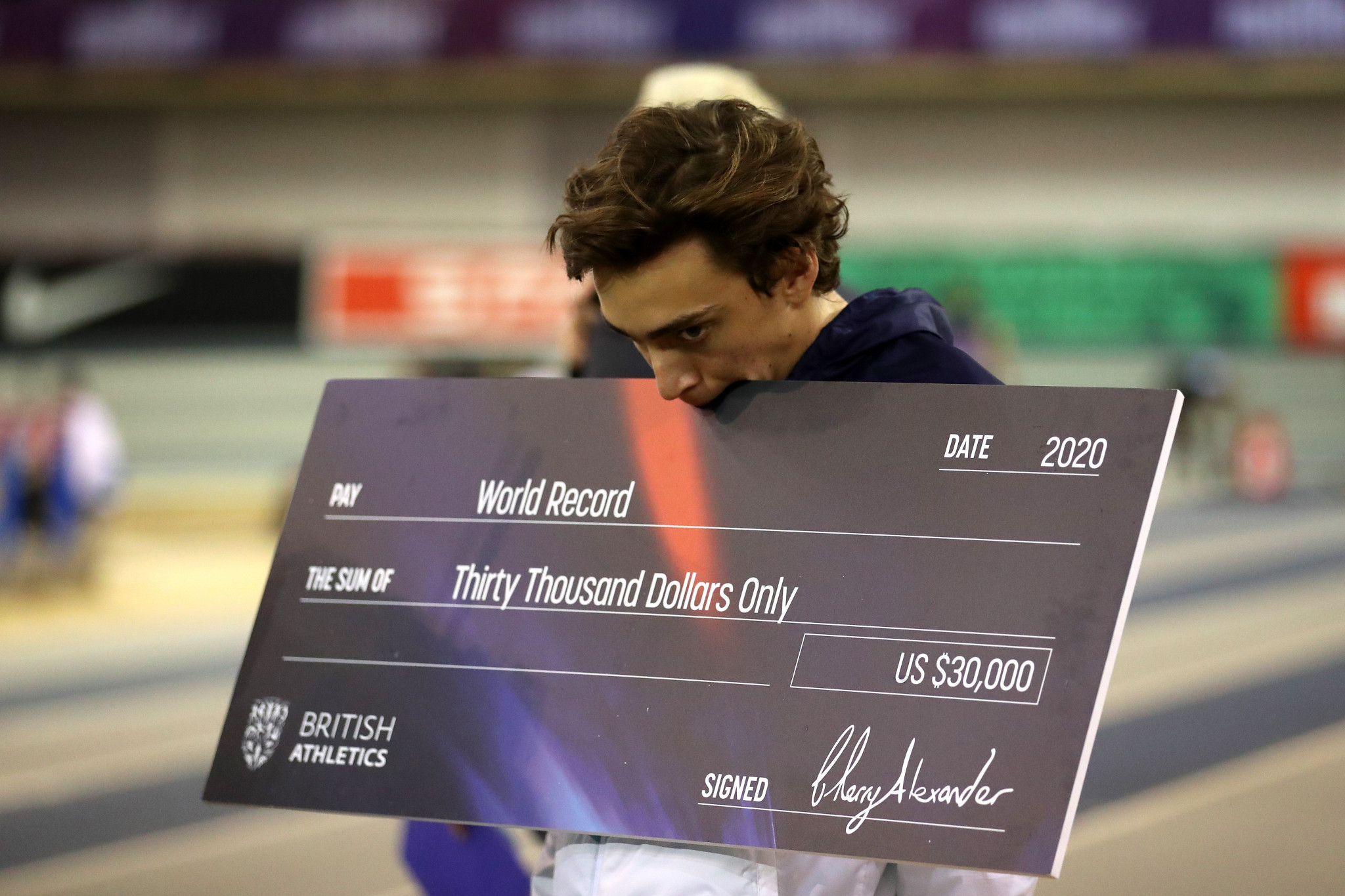 The 20-year-old cleared 6.17m in Toruń in Poland last week and went a centimetre further with a clearance of 6.18m today at Emirates Arena.

The United States’ Sam Kendricks was the closest competitor to the Swede but could only clear 5.75m for second place.

“There was such great energy the crowd was giving me and I really thrive off that," said Duplantis.

“I felt like I was over it and once I was going over I knew I had it.

“You can’t tell how far away you are from the bar but it felt like a good jump from the get-go.

"I tried a stiffer pole and it worked out.

“It's unfair to think I'll break it every time I compete,” added Duplantis.

"I wouldn't be in the situation I'm in without my mother." @mondohoss600#WorldIndoorTour pic.twitter.com/JZgMskf4MH

“You don't need to break a record to win every competition.

"Winning is always the goal, then if I have the energy left I’ll crank it up a bit.”

The Scot, running at her home track came around the long-time leader Dawit Seyaum to take a popular victory.

Jamaica’s Akeem Bloomfield would come out on top of an incredibly competitive men’s 400m field in 46.20 ahead of United States’ Obi Igbokwe.

Kenya’s Bethwel Birgen looked very comfortable in the men’s 1500m in a time of 3:36.21 ahead of Poland’s Marcin Lewandowski.

Stephenie Ann McPherson literally crashed out of the women’s 400m after a collision with team-mate Janieve Russell, allowing an unlikely winner, Britain’s Jessie Knight to take victory on home soil with a new stadium record of 51.57.

A blanket finish was sorted by the cameras in the women’s 60m hurdles as United States duo Christina Clemons and Nia Ali finished behind Belarus’ Alina Talay who clocked a time of 8.03.

Ali would get the nod for second ahead of Clemons as both finished on 8.04.

In the men’s equivalent, home favourite Andy Pozzi recovered to win in 7.54 ahead of Kuwait’s Yaqoub Mohamed Al Youha.

Ahoure has not lost indoors since 2014 when she was defeated by Fraser-Pryce at the World Indoor Championships.

Seventeen-year-old Amy Hunt ran one of the quickest under 18 times ever for fourth in 7.34.

In the men’s equivalent United States’ Ronnie Baker was dominant, running 6.50 for a stadium record with a clear gap between him and second place compatriot Mike Rodgers.

Ukraine’s Maryna Bekh-Romanchuk pulled out an incredible 6.90m in the third and fifth rounds of the women's long jump but was not guaranteed the win after the new rule wiped the previous five jumps clean for the final three in a last round shootout.

However, Bekh-Romanchuk, Sweden’s Khaddi Sangia and Britain’s Jazmin Sawyers all had no jumps making the final round obsolete.

In the final event of the day, home hero Laura Muir just missed the women's 1,000m world record by a couple of seconds, running out of steam in the final lap to finish in a time of 2:33.45 - the 11th quickest time ever.

Muir sits second on the all-time list over the distance with her quickest run coming in 2017 and despite looking on target at 600m, her final 400m was a tough 62 seconds of running.