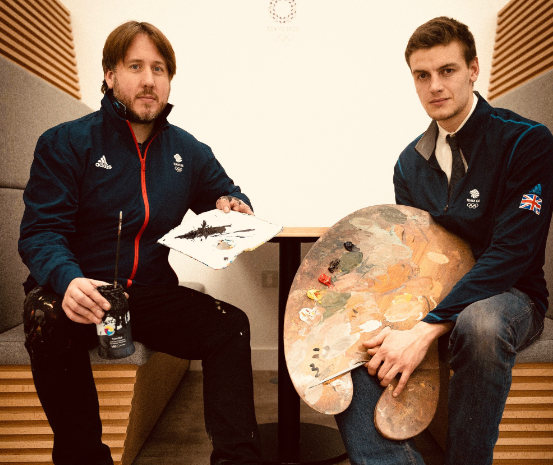 Team GB have appointed two artists-in-residence for the Tokyo 2020 Olympic and Paralympic Games.

Ben Mosley and Max Denison-Pender will travel to Japan to paint the athletes at work, rest and play.

The paintings will be virtually exhibited before being sold and auctioned, with proceeds going towards Team GB fundraising for future Olympics.

"Art is synonymous with the Olympic Games in many ways, and we are delighted to be able to support two young British artists as they seek to capture the essence of Tokyo 2020 and Team GB's performance there," Team GB director of marketing and communications Scott Field said.

Mosley is one of Britain's premier live artists and paints in an abstract style.

Past commissions include Wembley Stadium, with two large-scale murals depicting its history.

He also worked with McDonald's for the World Cup in Brazil, with his painting "Fans of the World" used on the company's fry box.

"I paint about many different sports in my practice, so being an official artist of Team GB is fulfilling a life's ambition," Mosley said.

"It's a terrific honour to be going to Japan to represent my country through my art.

"I paint about sport because it brings people together in celebration from all walks of life and the narrative behind each sporting moment is so inspiring.

"The Olympics is so special because of the incredible bond between the athletes that compete and the fans they are representing in the stadium.

"I will be aiming to capture this unique bond in my work and celebrate the triumphs of Team GB, both individually and collectively, throughout the games in my paintings."

Denison-Pender left school at age 16 - and views his ticket to Tokyo as fate intervening.

"When I was a speedy 13-year-old I was a keen sprinter and hurdler; coming fourth in the National Championships final in Birmingham", Denison-Pender said.

"When the Olympics came to London in 2012, I remember wanting more than anything else to star in a future Games, then painting took over my life and nine years on, here I am at the Olympics with a paintbrush instead of a baton.

"In a world of smartphones where everyone has a camera to capture the here and now, there is still a demand for more meditative images through the medium of paint to ignite the imagination and inspire."