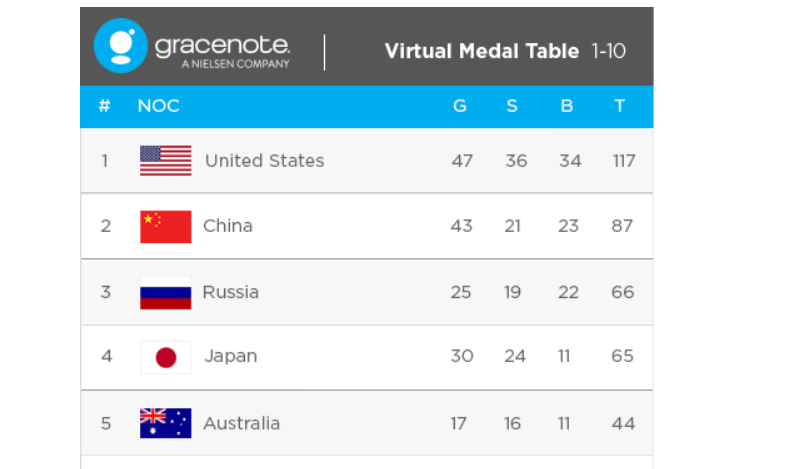 With exactly six months to go before Tokyo 2020 begins, a new forecast suggests hosts Japan may be on course to hit their 30 gold-medal target.

The latest projection, by sports-data company Gracenote Sports, puts Japan on 30 gold medals exactly, trailing only China with 43 and top dogs the United States on 47.

This would represent substantial progress from the last Summer Olympics in Rio de Janeiro in 2016, when Japan won only 12 gold medals in ranking sixth with 41 medals in total.

Gracenote analysis suggests the many new sports and events earmarked for the Japanese capital are likely to play a big part in the improvement.

By the data company's reckoning, there will be 44 new or returning events at this year's Olympics, ranging from completely new sports such as sport climbing, karate and basketball 3x3, to new events in traditional sports such as shooting and swimming.

Taking into account only medals for these new sports and events, Japan is projected to win nine of the 44 gold medals on offer - three more than any other nation.

All told, Tokyo 2020 is set to feature 339 events compared with 306 at Rio 2016 - an increase of nearly 11 per cent, which should help quite a number of National Olympic Committees (NOCs) to point to big improvements in their respective medal hauls.

The Netherlands is another country expected by Gracenote to do particularly well, more than doubling its Rio tally with 41 Tokyo 2020 medals overall.

Especially strong showings are expected from the nation's generally orange-clad athletes in cycling and sailing.

India and Turkey, who might have been hosting the 2020 Games had the bidding race turned out differently, are among countries similarly tipped to register marked improvements on their medal totals from Rio 2016.

By contrast, Great Britain's stellar performances in recent Summer Games are expected to tail off, with a drop of 25 medals from the team's remarkable Rio haul of 67 projected.

The 2024 hosts France and Germany are also expected to win fewer medals in Tokyo than in Rio, while Australia may do markedly better.

"If Australia is to challenge for a top-five spot on the medal table, success in swimming competitions must return to the levels achieved from 2000 to 2008," Gracenote state.

Much uncertainty, of course, relates to Russia, whose participation in Tokyo may be contingent on a ruling by the Court of Arbitration for Sport (CAS) on sanctions imposed over the long-running doping scandal.

If confirmed in time, the sanctions would permit only Russian athletes who can prove they were not involved in the scandal to be cleared to compete in Japan as neutrals.

"With Russia likely to be banned from Tokyo 2020, it remains to be seen how many of the 66 medallists currently forecast… will be allowed to compete," the company says.