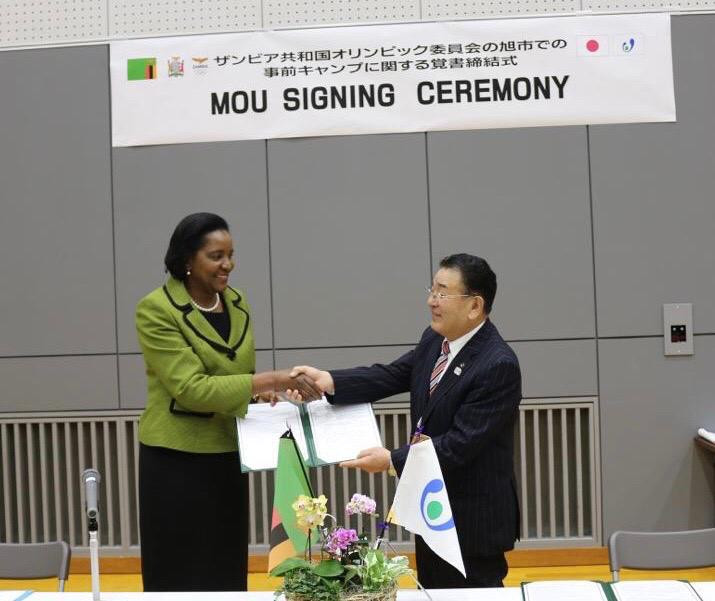 Zambia are set to use the training facilities in Asahi in the run up to this year's Olympic Games after signing a Memorandum of Understanding (MoU) with the city.

The MoU is part of the Tokyo 2020 host city initiative, with Zambia now due to camp and train in Asahi in the run-up to the Games.

The MoU was signed by the National Olympic Committee of Zambia President Alfred Foloko in December, while Asahi Mayor Tadanao Akechi signed it this month.

"The people of Asahi are ready to welcome and support the Zambian athletes during pre-camp training and the Olympic Games because Zambia has a remarkable historical background on Olympics, especially after hoisting the Zambian flag first at the Tokyo 1964 Olympic Games," said Akechi.

"I am optimistic that through this programme, the people of Asahi City and the Zambian sports teams will seize the opportunity and promote globalism, and the economic and cultural activities for the two countries," she said.

"Zambia is looking forward to further expansion of trade and investment between the two countries.

"The country has enough space in various sectors such as energy, mining, infrastructure, tourism, health, science and technology, agriculture, agro-processing, and manufacturing."

Zambia are expecting to compete in disciplines such as judo, boxing, athletics, swimming, handball and football at Tokyo 2020, depending on the results from qualifying.

Their last Olympic medal came at Atlanta 1996, when Samuel Matete secured the silver medal in the men's 400 metre hurdles.

Their only other Olympic medal was at Los Angeles 1984 through boxer Keith Mwila.