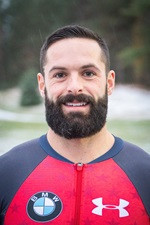 American bobsledder Kyler Allison has been banned for four-years by the United States Anti-Doping Agency (USADA) after he refused to provide a urine sample.

In a statement, USADA revealed Allison declined to give a sample when asked to do so by a doping control officer during an out-of-competition test on July 25.

The decision from USADA could spell an end to the career in the sport of the 35-year-old and quashes any hopes he had of representing the US at the 2022 Winter Olympic Games in Beijing.

His four-year ban began on August 15 - the date he accepted a provisional suspension - and he will not be able to return until August 2023.

Allison was on the US national team last season and competed on the International Bobsleigh and Skeleton Federation World Cup circuit.

The former Crossfit competitor registered a best result of 14th in the four-man event in a sled piloted by Justin Olsen.

He was also part of the two-man team, along with Olsen, which finished 17th at the World Cup in Sigulda in December.