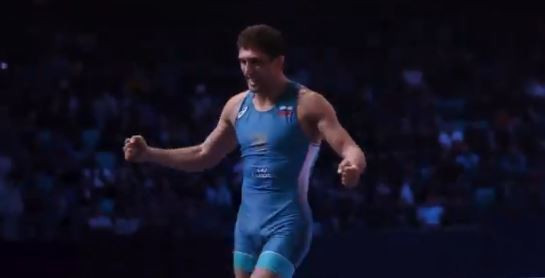 Russia earned two of the four freestyle golds available tonight at the World Wrestling Championships in Nur-Sultan, finishing the day well clear in the team scores.

David Baez won the first Russian gold in the 70kg category at the Barys Arena in the Kazakhstan capital, with a 14-2 win over home wrestler Nurkozha Kaipanov.

After day four, Russia topped the freestyle team scores with 115, ahead of the hosts, who had 75, and Iran, who are on 51.

Georgia's Geno Petraiashivili beat Taha Akgal of Turkey to the 125kg gold, on a decision after a score of 6-6.

Bronze went to Uzbekistan's Khasanboy Rakhimov, who beat Deng Zhiwei of China 6-1, and Oleksandr Khotsianivskyi of Ukraine, who had a 5-1 win over Syria's Badzha Khutaba.

The day session featured qualification rounds in the final four freestyle weights, with those advancing to the semi-finals earning places for their country at the Tokyo 2020 Olympic Games.

In reaching the 86kg semi-finals with his performances, Myles Amine Mine became the first wrestler in San Marino's history to qualify for the Olympics.

Amine, 22. who was born and raised in the US state of Michigan and holds dual citizenship, told United World Wrestling: "It just feels incredible.

"I know the amount of work I put in, year-round these past few years – I decided my goal was to get to the Olympics here."