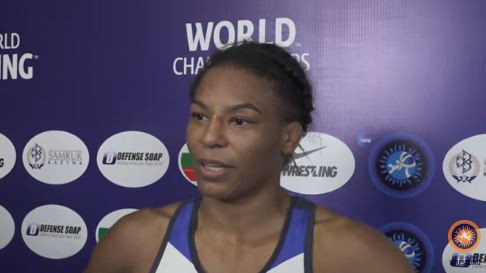 Japan top the rankings in the women's competition at the World Wrestling Championships, but both their finalists settled for silver as golds went to the United States, North Korea, Azerbaijan and Russia.

Jacarra Winchester won the 55kg title for the United States, beating Japan's Nanami Irie 5-3 at the Barys Arena in the Kazakhstan capital of Nur-Sultan.

Russia's Olga Khoroshavtseva overwhelmed home wrestler Marina Sedneva 13-0 to claim one of the bronze medals, with the other going to Mongolia's Bolortuya Bat Ochir, who celebrated a 12-9 win over Turkey's Bediha Gün.

Winchester's compatriot, Adeline Gray, seeking a fifth world gold, moved through for a defence of her 76kg title in tomorrow's final with a semi-final win over Germany's 2014 69kg champion Aline Rotter-Focken.

In the women's 53kg final, North Korea's Pak Yong Mi was an overwhelming victor against Japan's Mayu Mukaida, by a margin of 12-2.

Bronze medals went to India's Vinesh Phogat, who won by a fall against Maria Prevolaraki of Greece, and Pang Qianyu of China, who won by an injury default against Poland's Roksana Zasina.

Mariya Stadnik of Azerbaijan was an overwhelming winner over Romania's Alina Vuc in the 50kg final, taking the decision 11-0.

There was satisfaction for the home crowd as Valentina Islamova Brik won 50kg bronze by a fall, over Ukraine's Oksana Livach, while the other bronze went to Ekaterina Poleshchuk on judges' decision after finishing 9-9 with China's Sun Yanan.

Russia's gold was contributed in the 72kg final by Natalia Vorobeva, who beat Ukraine's Alina Makhynia 4-0.

Japan’s Masako Furuichi earned bronze with a 2-0 win over home wrestler Zhamila Bakbergenova, while the other bronze went to Paliha Paliha of China, thanks to a 2-1 victory over Victoria Francis of the United States.

After day five, Japan lead the women's rankings with 61 points, ahead of Russia on 55 and China 42.

All wrestlers who advance to the semi-finals in Olympic weight secure a berth for their country at the Tokyo 2020 Olympics.