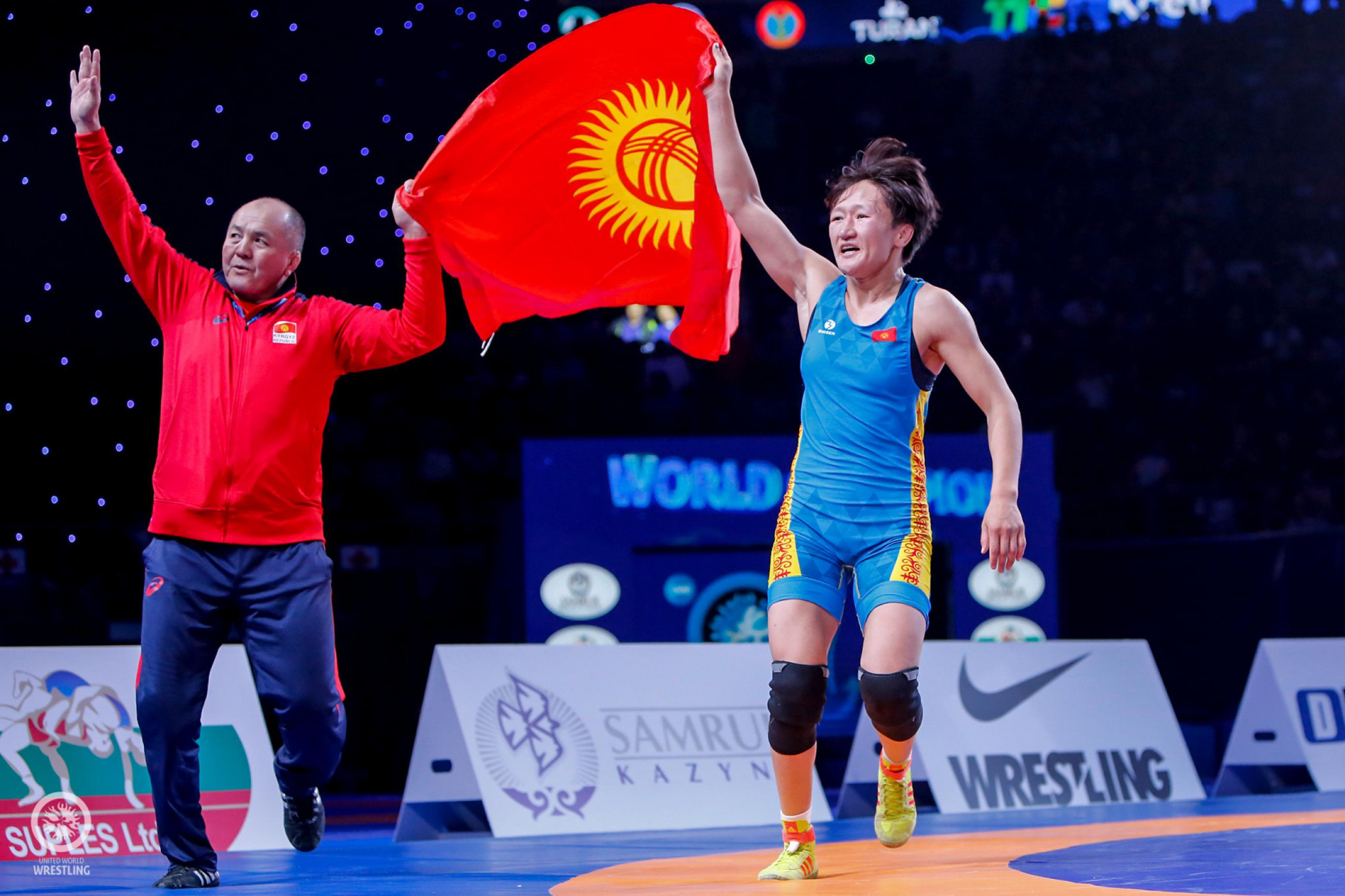 "When I started wrestling, it was just a dream for me to become world champion," the 26-year-old Tynybekova said after her dramatic victory at the Barys Arena in Kazakhstan.'s capital Nur-Sultan.

"But today, the dream came true."

Since Kyrgyzstan made its debut at the World Championships in 1994, the former Soviet republic had won nine medals, including Tynybekova's bronze in 2017, but no one had reached the top of the podium.

"Last year, I couldn’t participate in the World Championships [in Budapest] because of an injury," Tynybekova, who returned to action to win gold at the Asian Championships in April, said.

"It was a serious injury and I missed six months of training.

"At that time, it was hard watching [the World Championships] because I wanted to be there so badly."

In the final, Tynybekova fell behind 3-3 on criteria when Yusein scored two with a stepover with a minute to go.

"When the score was 3-3 and there was just 40 seconds, I didn’t panic," Tynybekova said.

"I knew I could score two points more."

She duly did, tackling Yusein to her back with about 10 seconds to go to secure the historic victory.

In the women’s 68kg final, Tamyra Mensah-Stock earned a third women's gold at these Championships for the United States with an 8-2 win over Sweden's Anna Fransson.

The bronzes were claimed by Germany's Anna Schell, who beat Sara Dosho of Japan 4-1, and Battsatseg Soronzonbold of Mongolia, who defeated Ukraine's Ala Cherkasova on a decision after finishing at 2-2.

In the women's team competition, Japan, surprisingly limited to just one gold medal, had six medallists overall to top the standings with 137 points.

Russia, with two golds, a silver and two bronzes, placed second with 108 points, edging the United States by three points.

China finished another three points behind the Americans.

Meanwhile, Russia captured the two freestyle men's golds on the night, with Gadzhimurad Rashidov triumphing following his move up to the Olympic weight of 65kg, and Zavur Uguev successfully defending his 57kg title.

Both won by technical falls.

Rashidov, a silver medallist at 61kg over the past two years, overwhelmed home wrestler Daulet Niyazbekov 11-0 in just 1min 42sec, capping the victory with a spin-behind takedown for the final points.

It was by far Rashidov's easiest match of the tournament, after he emerged from a bracket that included victories over defending champion Takuto Otoguro of Japan and three-time world champion Haji Aliyev of Azerbaijan.

"I took a very long road to reach this title," Rashidov said.

"My side of the draw was more difficult to get to the final, so that was why the final was easy."

"This victory means a lot for me because this Championship is before the Olympic year - Tokyo 2020 is waiting for us."

Uguev broke open a close match with European champion Suleyman Atli of Turkey when he scored a takedown in the second period for a 5-3 lead, then racked up a combination of tilts and rolls to complete a 13-3 victory in 4:40.