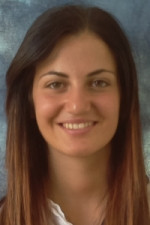 Rossi managed a total of 73 from the three rounds held at the Trap Concaverde shooting range.

She is followed in the standings by three shooters on 69 – Russia's Iuliia Saveleva, Spain's María Quintanal Zubizarreta and fellow Italian Jessica Rossi.

Italy lead the team rankings on a total of 210, with Silvana Stanco's 68 making up the remainder.

Spain's Quintanal Zubizarreta, Fatima Galvez and Beatriz Martinez are second with 205, while France's Carole Cormenier, Melanie Couzy and Adeline Couet are third with 197.

Both the second part of qualification and the final are tomorrow.

In the women's junior trap event, Italy's Sofia Littame is first with 70, followed by Spain's Mar Molne Magrina with 69 and Great Britain's Jessica Ellen Hayward with 68.

Italy, Russia and Czech Republic occupy the top three places in the team standings with 204, 196 and 188, respectively.