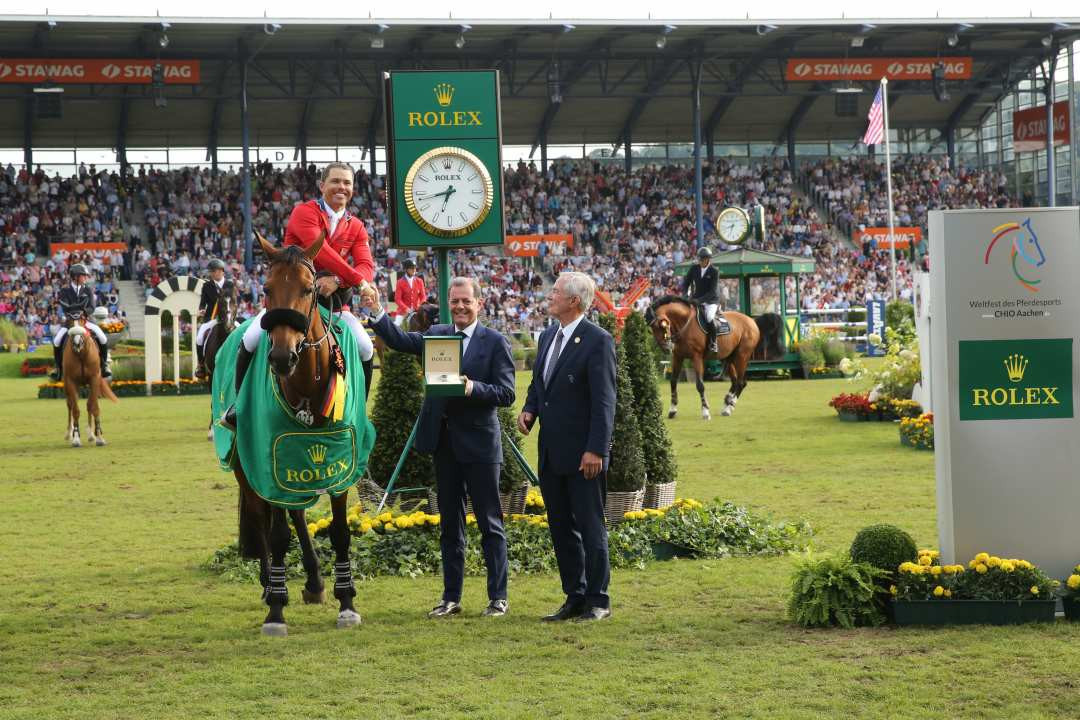 Kent Farrington of the United States, who missed much of last year with a broken leg, tonight achieved one of his great ambitions as, riding Gazelle, he won the Rolex Grand Prix 2019 event at the World Equestrian Festival in Aachen, Germany.

Home rider Daniel Deusser was the last to go in the jump-off with Tobago Z and had the chance to snatch victory.

Tobago flew over the last oxer and crossed the finish line in 44.35 seconds, but the clock had stopped at 43.98 seconds for Farrington and Gazelle.

The American thus earned the 330,000 euros (£296,000/$370,000) first prize and also the chance to win the Rolex Grand Slam of Show Jumping, which goes to any rider who wins the four Grand Prix events consecutively.

In order to gain that ultimate prize, Farrington would need to win at the two remaining majors this season – the CSIO Spruce Meadows "Masters" in Calgary, Alberta, from September 5 to 8, and the CHI Geneva in Switzerland from December 12 to 15 – before winning at the first of next year's majors, the Dutch Masters.

So far there has been only one winner of the Grand Slam in show jumping – Britain's Scott Brash in 2015.

Third place went to Britain’s Ben Maher, riding Explosion W, whose rising hopes of victory were ended when they knocked down the rail on the penultimate fence.

The time would have sufficed, as Maher finished four hundredths of a second faster than Farrington.

Farrington said he had one thing in mind when he entered the ring for the jump-off – not to finish second again, as he had in 2014 when he had finished fastest riding Voyeur but had knocked a rail.

“I wanted to have my name eternalised on the winners’ board,” he said.

“I didn’t want to have the fastest four-fault ride again.

“It is such an impressive list of fantastic riders who have won the Grand Prix of Aachen.

Farrington began the 2018 season as a contender for the Rolex Grand Slam, having won the concluding major of 2017 in Geneva.

However, while he was training a horse at the Winter Equestrian Festival in Wellington, he had an accident and suffered a compound break of his lower leg, which had to be operated on and meant he was out of action for months.

“It was really bad and a real test of how much I really wanted to do all of this here,” he said.

“Gazelle has helped me fight my way back to the top again.”

Despite missing out on the top prize, Deusser was a happy man.

“Of course, I would have loved to have won but I am overjoyed at coming second.”