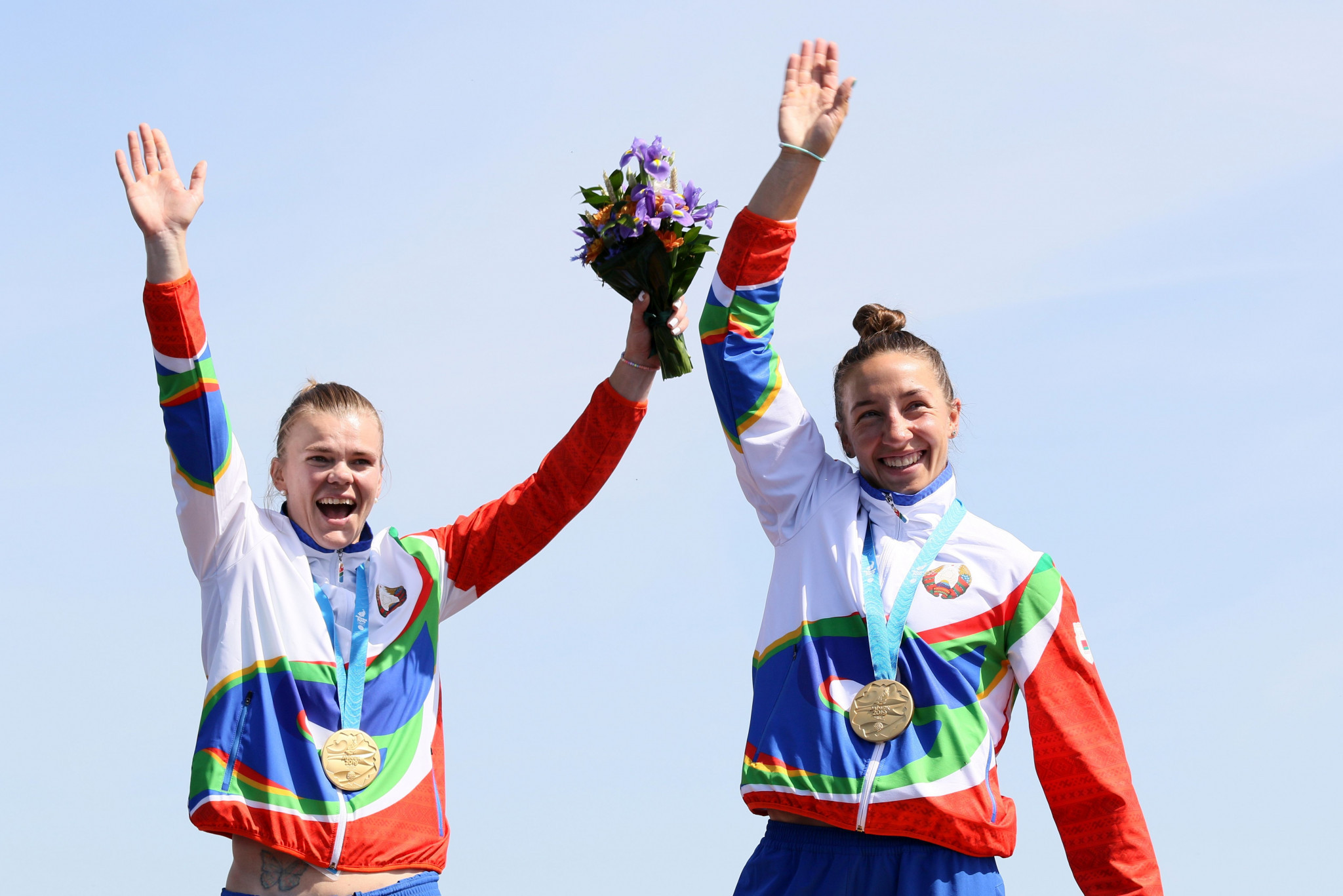 Khudzenska, a London 2012 bronze medallist in the K4, and Litvinchuk clocked 1min 40.888sec to take the European Games title ahead of Hungary’s world champions Anna Kárász and Danuta Kozák, the latter of whom has a total of five Olympic and 14 world golds.

The bronze medal went to Russia’s Kira Stepanova and Anastasia Panchenko, who recorded 1:43.358.

It was a second successive shock result at the Zaslauje course, which is about 25 kilometres from Minsk, following the defeat for Germany’s  triple Olympic and 10 times world champion Sebastian Brendl.

"We had our own strategy," said Litvinchuk.

"As you saw we were in front from the beginning and our goal was to not let anyone overtake us.

"We did not paddle together since 2013, so we can say this is our first year together.

"This is a very, very good result for us."

Tomasz Kaczor was moved to tears on the podium after leaving Brendl in his wake in winning the men’s C1 1,000 metres.

Brendl had to settle for an unfamiliar colour of medal here as he finished third in 3:59.278.

"After yesterday’s heats I suspected I will be able to get this gold medal," Kaczor said.

"I did not have any special tactics, just to go straight and be the fastest.

"The race was very good, I cannot describe how I feel right now."

Six-times world champion and Rio 2016 gold medallist Max Hoff added another major gold to his collection at the age of 36 in partnership with 20-year-old Jacob Schopf in winning the men’s K2 1000 metres event.

The German pairing clocked 3:18.175 to finish ahead of Ukraine’s Oleksandr Syromiatnykov and Oleh Kukharyk, who clocked 3:18.865.

The bronze medal was claimed by Russia’s Vladislav Litovka and Roman Anoshin, who recorded 3:19.023.

Russian archer Natalia Avdeeva, winner of successive golds this year in the World Championships and the earlier mixed team event here had to take a silver in the women’s recurve final as she was beaten 10-8 in a shoot-out after finishing level on 144-144 with Slovenia's Toja Ellison.

The 25-year-old Slovenian, who had to give up a gymnastics career aged 12 after being hospitalised with a serious spinal infection, thus took her first European Games gold in this women's compound individual final at the Olympic Sports Complex.

Paulette Dodemont of France won the bronze medal with a 148-142 victory over Turkey’s Yeşim Bostan.

The bronze went to Gabriela Bayardo, the former Mexican now competing for The Netherlands.

The bronze medal went to Bulgaria's Antoaneta Boneva, who scored 31.

The final shooting gold of the day went to Germany's Oliver Geis in the men's 25m rapid fire pistol, who scored 33 to win.

In the new formula of Dynamic New Athletics, six teams emerged from this evening's rainswept semi-finals to contest the grand finale on Friday (June 28) - Ukraine, France, Germany, Belarus, Italy and the Czech Republic.

Russia finished sixth and last in the second semi-final.