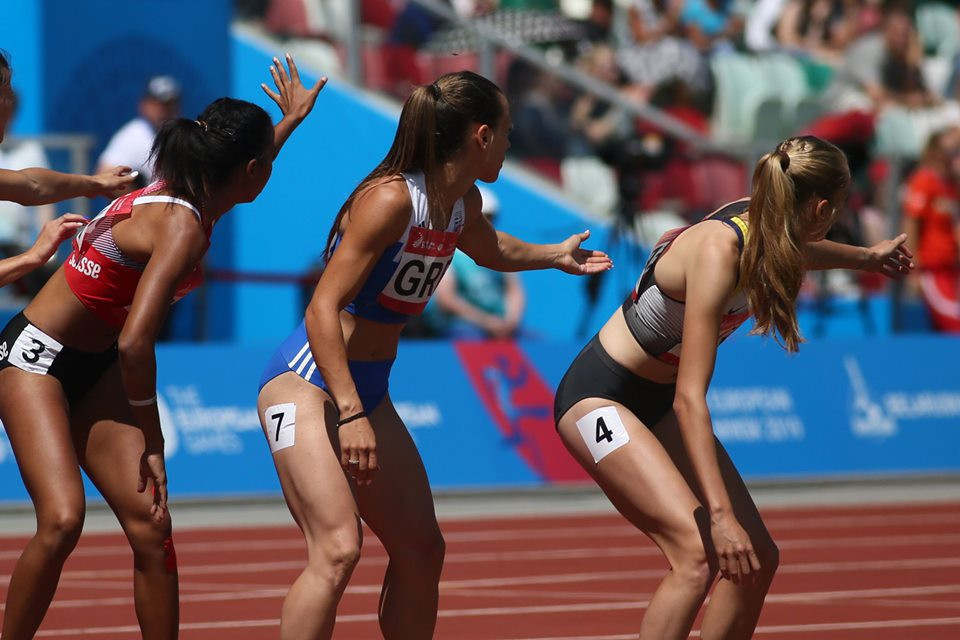 The first public sighting of "Dynamic New Athletics" - the new format being debuted at the 2nd European Games - proved auspicious here today as it provided more than enough drama, suspense and surprise to keep a decent-sized crowd genuinely engaged through four two-hour mini-matches.

It helped that the home side, involved in the third match, produced a number of outstanding performances that had home fans very obviously enthralled.

But the ultimate experience of the Belarus team said much about the nature of this European Athletics project designed in part to offer the European Games a suitable athletics offering following Baku 2015, where a third-tier European Team Championship proved diverting in itself but thin on elite athletic talent.

The concluding event of the mixed medley relay, where teams of two men and two women ran successive legs of 800m, 600m, 400m and 200m, had a staggered start enabling those with most points from the foregoing eight events to be given a proportional starting advantage.

Belarus, whose points record earned them a 50-metres start, were beaten on the line by the Czech Republic, who were 0.02 seconds faster.

There was an extra touch of novelty about this competition in that it was the first time a senior Russian team had competed in international athletics since 2015, following the national federation's suspension by the International Association of Athletics Federations (IAAF) in the wake of the Russian doping scandal.

Russia is competing under its own name  the athletics event here, but all 19 in the team have Authorised Neutral Athlete status as a far as the IAAF is concerned.

On Monday last week the Russian Olympic Committee replaced 10 athletes who lacked ANA status with 10 who had it.

They maintained that the switch was not technically necessary as the European Olympic Committees (EOC) determines which athletes can compete in its Games, but added that the move had been made as a gesture of "goodwill".

Of the nine events contested, four were traditional - men’s and women’s sprints and sprint hurdles.

The mixed 4x400 metres relay proved compelling, particularly in terms of the permutations of the two men and two women involved in each team.

Slovenia’s gamble to run both its men early in the second match and rely on Anita Horvat to bring the baton home proved both well-judged and entertaining as the crowd bayed her home with five men in pursuit.

Long jump and javelin for the women involved sequences of head-to-heads, as did the men’s high jump, although this had an additional "jeopardy" element in which jumpers - in conjunction with team managers - secretly nominated heights they intended to clear.

The analogy was making sealed bids for a house - although in this case there was an additional obligation of clearing the house.

And all concluded with the staggered-start mixed medley relay, self-styled the Hunt, where the first runner past the finish line won the overall match for their team.

The formats, inevitably, led to some curious turns of events.

His opponent from Denmark, Simon Hansen, who had won both his earlier head-to-heads by bidding conservatively and successfully while more ambitious rivals failed, won top points after electing to clear and delivering a personal best of 1.94m.

The concluding event of the mixed medley relay, where teams of two men and two women ran successive legs of 800m, 600m, 400m and 200m, had a staggered start enabling those with most points to be given a proportional starting advantage.

Four teams avoided the quarter-finals on Tuesday (June 25) and went straight to the semi-final on Wednesday (June 26), ahead of the final on Friday (June 28) - Ukraine, the Czech Republic, Germany and Russia.

A historic first 4 international athletics -final event -the hunt (800-600-400-200 mixed relay) at the European Games in Minsk where the Gunderson Method was used with starting gates & handicaps based off points scored in the previous 8 events! Well received by all @Minsk2019BY pic.twitter.com/go0Lc0c2gS

Medals were awarded for the nine best performances in each discipline today.

The Portuguese runner clocked a personal best of 10.35sec in winning his race in the fourth and final qualifying match, with Turkey's second placed Jak Ali Harvey, the 2016 European silver medallist, earning bronze for his time of 10.42.

The gold medal for the best men’s 110m hurdles performance of the day went to Italy’s Fofane Hassane, who won his race in 13.60.

Maksim Nedasekau of Belarus, whose ebullient performance in the men’s high jump was one of the highlights of the day for home fans, took gold for the best height achieved - 2.27m.

Russian athlete Ilya Ivanyuk earned silver for his effort of 2.26m, with bronze going to Bondarenko, who leads this year’s world standings with 2.31, and who has cleared a best of 2.42m.

Home sprinter Krystsina Tsimanouskaya earned silver for her winning run of 11.36 in match three, while bronze went to Greece’s Rafailia Spanoudaki, who clocked 11.61.

Elvira Herman of Belarus won individual gold for her time of 12.89 in the women’s 100m hurdles.

Tatsiana Khaladovich of Belarus won home gold in the women’s javelin with 64.37m.

Silver went to Yekaterina Starygina of Russia, who threw a personal best of 63.57m, while Latvia’s Madara Palameika took bronze with 63.22m.

Nastassia Mironchyk-Ivanova took silver with a best of 6.71m, and bronze went to Ukraine’s Maryna Bekh-Romanchuk who reached 6.58.

A time of 3min 17.31sec earned Ukraine’s mixed 4x400 relay quartet gold for the best performance of the day, with silver going to the Czech Republic, who clocked 3:19.05m.

Bronze was claimed by Portugal, who recorded  3:19.63 in finishing second behind the gold medallists.

Ukraine earned gold for the fastest time in the concluding mixed media relay event, clocking 4:25.02 to win the fourth qualifying match of the DNA event.

Silver went to the Czech Republic for their time of 4:30.92, with Italy claiming bronze.