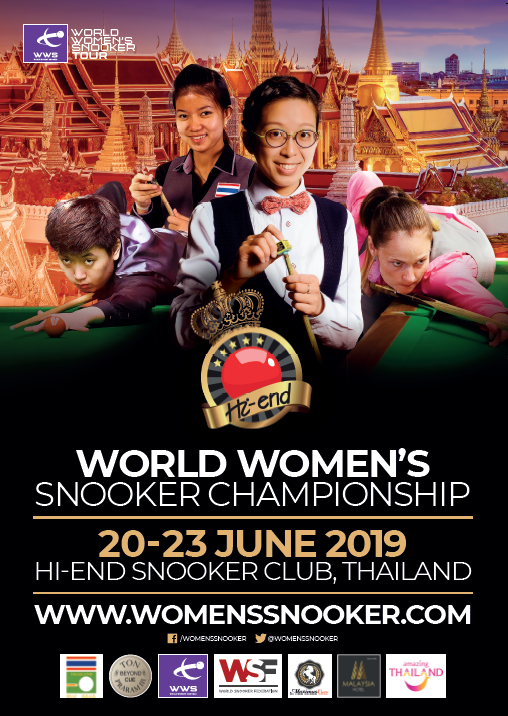 The 2019 World Women's Snooker Championship is set to begin in Bangkok tomorrow with Hong Kong's Ng On-yee looking to defend her title.

The 28-year-old, currently ranked second in the world, beat England's Maria Catalano 5-0 in the 2018 final in Malta to claim her third title in four years.

She also triumphed at the 2015 edition in Leeds in England and at the 2017 version in Toa Payoh in Singapore.

Joining Ng in taking part at the four-day event at the Thai capital's Hi-End Snooker Club is 11-time champion Reanne Evans of England.

Other players to look out for in one of the most international editions of the event ever is 12-time European champion Wendy Jans of Belgium and several newcomers to the circuit from India, Iran, Japan, Malaysia, Russia and Singapore.

In all, the tournament will see 54 players from 15 different countries – more than double the number who played last year – contest the biggest title of this season's World Women’s Snooker (WWS) Tour.

It will be held with the support of the Billiard Sports Association of Thailand and the World Snooker Federation.

Bangkok was announced as the host of the event in March.

It comes after Dubai and Beijing had both previously been named as the hosts.

The United Arab Emirates Billiards and Snooker Association was unable to fulfil its obligations, however, and the Beijing event, due to take place between March 20 and 23, was postponed.

This was due to a number of players experiencing travel and visa problems, leading to fears a full entry list would not be possible.

The World Women's Snooker Championship comes on the back of the inaugural Women’s Snooker World Cup at the same venue, where Thailand clinched a home victory today following a dominant performance by Waratthanun Sukritthanes and Baipat Siripaporn.

The pair, who made up Thailand’s A-team in the competition, began the day with a 4-0 success against compatriots Wongharuthai and Ploychompoo Laokiatphong, representing Thailand B, to book their place in the final.

It was there that they faced Hong Kong's A-team, led by Ng and Ho Yee Ki, who overcame English duo Evans and Kenna 4-2 in their semi-final earlier in the day.

What had appeared to be a close final in prospect proved to be a one-sided affair with breaks of 70, 48 and 50 by Thailand enough to propel them into a 3-0 lead, before Siripaporn sealed the fourth and ultimately final frame on the black to confirm victory.

The win is the first success for either Sukritthanes or Siripaporn in a major WWS ranking event and the first for Thailand as a nation in WWS competition.

There was a consolation prize for Hong Kong as the B-team of Jaique Ip Wan In and So Man Yan defeated Thai pair Panchaya Channoi and Thitaporn Nakkaew 2-0 to win the Challenge Cup side-event.

That was for teams who did not qualify for the knock-out stages of the main event.