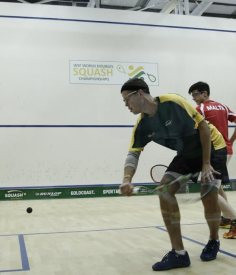 Cousins Cameron Pilley and Donna Lobban both maintained their 100 per cent starts across three events at the World Doubles Squash Championships in Gold Coast today.

The duo reached the mixed doubles semi-finals together with Pilley repeating the feat in the men's event.

In the women's tournament Lobban also remained undefeated to stay at the top of the round-robin pool at the Carrara Squash Centre.

In the mixed doubles Pilley and Lobban, the reigning Commonwealth Games champions and top seeds, defeated compatriots Christine Nunn and Ethan Eyles 11-4, 11-5 to top Pool A.

They have set-up a meeting with third-seeded Australians Alex Haydon and Zac Alexander who finished second in Pool B after their 11-5, 11-7 win over Malta's Colette and Kijan Sultana.

Nunn and Eyles have still advanced as Pool A runners-up and will play Pool B winners and second seeds Catalina Pelaez and Matias Knudsen of Colombia, who defeated Filipinos Aysah Dalida and Reymark Begornia 11-3, 11-9 today.

In the men's draw, Pilley teamed up with Ryan Cuskelly to finish top of Pool A with a fourth win from four.

It was a disappointing day for the Calvert brothers who also lost 11-1, 11-4 to Jean-Pierre Brits and Christo Potgieter, a result which effectively saw the South Africans through as Pool A runners-up at their expense.

Brits and Potgieter have self-funded their trip to Gold Coast.

Pool B saw second seeds Alexander and Rex Hedrick maintain their 100 per cent record as they beat Andres Herrera and Juan Vargas of Colombia 11-8, 11-6 to finish top.

The Colombians had earlier won in three against Malaysians Darren Chan and Brian Lim, 9-11, 11-9, 11-6, and finished as runners-up to also make the last four.

Pilley and Cuskelly will face Herrera and Vargas in the semi-finals with Alexander and Hedrick up against Brits and Potgieter.

In the women's event, which is a five-team round-robin competition, Lobban and Nunn recorded a third win from as many matches as they beat Jemyca Aribado and Dalida of The Philippines 11-7, 11-3.

Their compatriots Sarah Cardwell and Jessica Turnbull are their nearest challengers, winning both of their contests and boasting a match in hand.

Tomorrow sees the mixed and men's semi-finals as well as the penultimate round of women's matches.