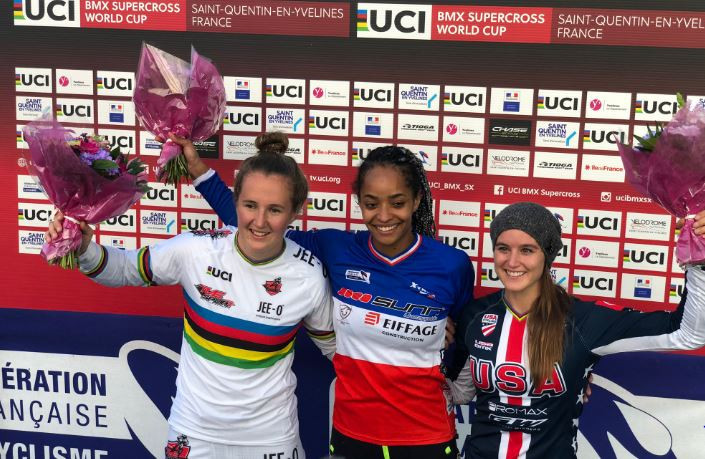 Manon Valentino upset the odds as she claimed victory in round six of the women's International Cycling Union BMX Supercross World Cup in Saint Quentin-en-Yvelines.

The French crowds had anticipated that Joris Daudet would offer their best chance of a race win  but it was Valentino who stole the plaudits instead.

Overall leader Laura Smulders from The Netherlands had edged to victory yesterday in a photo-finish with American Alise Willoughby, but Valentino overshadowed both riders to take the win on home soil.

Smulders finished second ahead of Willoughby as she extended her lead at the top of the overall standings.

Judy Baauw remains in third but sits just five points ahead of Valentino who moves closes the gap to the podium positions.

Daudet came into rounds five and six in fine form but he could not deliver the goods for the home crowd as runaway leader Niek Kimmann stormed to victory.

Kimmann had won the last three rounds and he made no mistake from his preferred lane eight.

Daudet put up a fight in the back straight as his countrymen and women roared him on - more in hope than expectation – but Kimmann had the better acceleration and the win was never in doubt.

The second place finish affords Daudet breathing space in the overall standings with Switzerland's David Graf, who claimed the last step on the rostrum in France, more than 100 points behind in third place.