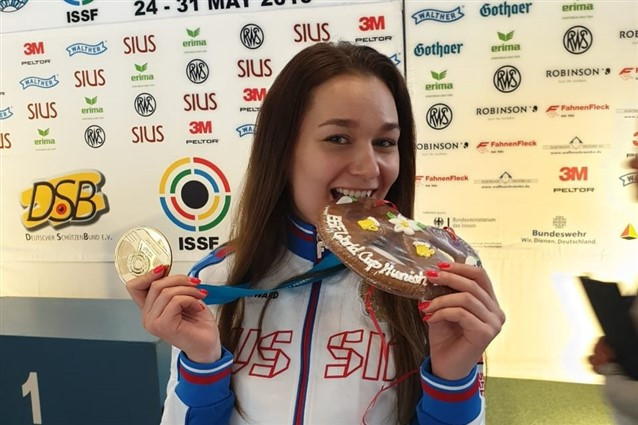 The 2015 European junior champion qualified in seventh place for the final, where she triumphed with a total of 461.6 points to take the first Olympic quota place for Tokyo 2020.

Zykova was in second position for most of the final at the Olympic Shooting Centre behind Great Britain’s Seonaid McIntosh, who was 0.9 points ahead after the penultimate shot.

Norway’s Katrine Lund came third with 450.2 points and took the second Olympic quota for her country.

Wei won both the silver medal, with 239.6 points, and an Olympic quota place.

South Korea’s Kim Minjung was the bronze medallist with 220.8 points.

Lower down the rankings, India’s Manu Bhaker finished in fourth place and took the second Olympic quota for her country.

Today's one other final came in the men's 25m rapid fire pistol event with China's Lin Junmin coming out on top with a total of 32 points.

France's Clement Bessaguet was the runner-up with 30 points, while compatriot Jean Quiquampoix came third with 25.

Action in Munich is due to conclude tomorrow with finals being held in the mixed team 10m air rifle and air pistol events.