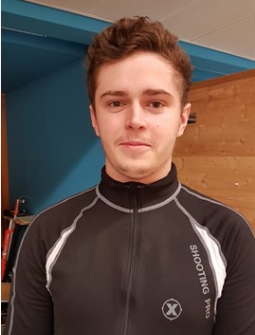 Nepejchal had qualified eighth out of eight finalists, by a margin of 0.2 points, but the 19-year-old from the Czech Republic held his nerve to secure victory in Munich on Tuesday.

While there was celebration for Nepejchal, there was frustration for Croatia's Petar Gorsa, who had to settle for yet another silver medal.

Gorsa finished second at the 2018 World Championships and was well beaten by Nepejchal, who is 12 years his junior, in the head-to-head shootout for gold.

China's Haoran Yang, who beat Gorsa to the gold medal at the World Championships in Changwon, finished third having qualified in first place earlier in the day.

Yang appeared in imperious form after finishing the qualifiers more than a point ahead of the rest of the field, but could not maintain his accuracy at the crunch.

Ukrainian Oleh Tsarkov and Italian Marco Suppini finished in fifth and sixth places, respectively. which were enough for both to earn their federations Olympic quota places for Tokyo 2020.

Also on Tuesday in Munich, qualifiers were held for the men's 25m rapid fire pistol and the women's 50m rifle 3 positions.

Remaining competitors will shoot for medals on Wednesday, as will those in the women's 10m air pistol.