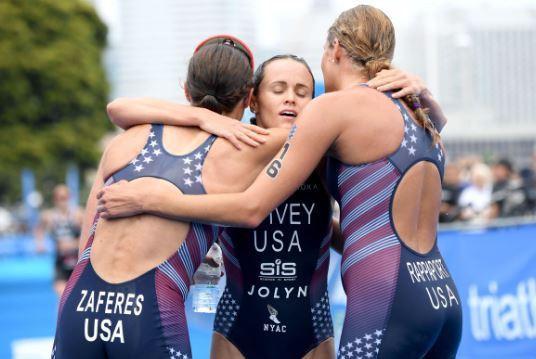 Zaferes arrived in the Japanese city having claimed gold in Abu Dhabi and Bermuda, and the competition proved a triumph not just for her but for her team-mates Summer Rappaport and Taylor Spivey as they claimed the top three places, respectively.

It was the fourth WTS podium sweep for the United States and its first since 2016.

Britain’s Jess Learmonth had the fastest swim, with Maya Kingma of the Netherlands following her out, and with the US trio taking the next three places.

After a seven-strong group had broken away in the bike ride, Zafares and Rappaport pulled away early on the run, and Spivey eventually beat her training partner, Japan’s Yuko Takahashi, to bronze.

Zafares made her winning move in the last of the 10 kilometres, winning in 1hr 52min 12sec, with Rappaport crossing 21 seconds later.

Frenchman Vincent Luis, the overall series leader, won the men’s race against a field that included Spain's multiple world champion Mario Mola, who dropped away from contention after a disappointing swim.