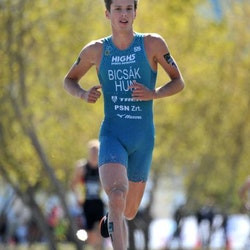 Germany’s Valentin Wernz qualified fastest in the men's event on the opening day of the International Triathlon Union World Cup in Chengdu.

Wernz, who claimed bronze at the World Cup in Australia in March, won his semi-final in 53min 20sec.

Bence Bicsak, seventh at the World Triathlon Series event in Bermuda last month, topped the standings in the first semi-final.

Jason West of the United States progressed to the final by winning the third semi-final heat as he clocked 53:35.

The top nine in each of the three men's heats, plus the athletes with the next three fastest times, reached tomorrow's final.

Germany’s Laura Lindemann was the quickest qualifier across the two women's semi-finals as she finished in 58:35.

New Zealand’s Sophie Corbridge won the second semi-final, although she was considerably slower than the German.

Corbridge crossed in 1:00:45 to secure her place in the final.

The top 14 athletes in each semi-final qualified and have combined with the two quickest losers to create a 30-strong field in the final.