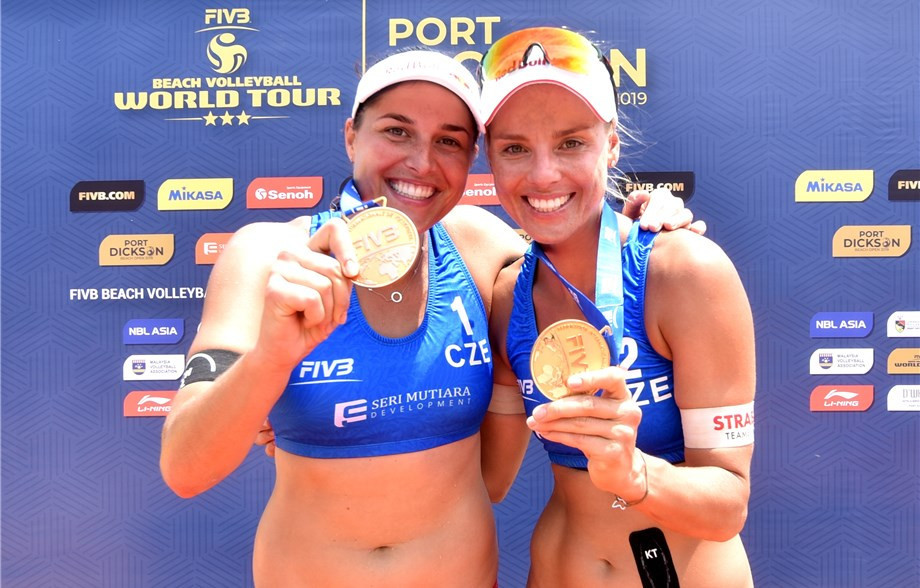 Top seeds Barbora Hermannová and Markéta Sluková of the Czech Republic came from a set down to win the Port Dickson Beach Open title in Malaysia on a tie-break.

Their opponents in the final of this 3-star International Volleyball Federation (FIVB) Beach World Tour,event, the United States pairing of Brooke Sweat and triple Olympic champion and world champion Kerri Walsh Jennings, got off to a strong start as they took the first set 26-24.

But, after Sluková's ace had won the second set 22-20, the Czech pair applied continual pressure on the US serve, coming through to win the decider 15-12.

"This was a tough game because there were so many long rallies," Sluková said.

"I think towards the end we just put in better serves and better defence that brought us the three-point lead."

Hermannová added: "Kerri and Brooke are very experienced so we were just ready to fight hard.

"This was an awesome start for our season especially after not playing for eight months."

It was the second Tour medal of the season for Hermannová and Sluková, who earned silver last week in Xiamen.

For Sweat and Walsh Jennings it was the third medal of the season after their bronze finishes in Chetumal and Sydney.

The men’s title went to the Brazilian pairing of Alison Cerutti, winner of the Rio 2016 title with Bruno Schmidt, and Alvaro Filho.

The second seeds, who only teamed up at the recent FIVB Tour event in Xiamen, beat the US pairing of Theo Brunner and Reid Priddy 24-22, 21-18.

Bronze, as well as silver, went to America as John Hyden  and Ryan Doherty won the third-place match against Germany’s Alexander Walkenhorst and Sven Winter 21-17, 21-7.