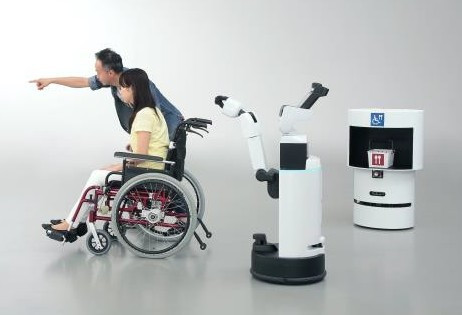 Tokyo 2020 has today announced the launch of its new Robot Project, one of many programmes aimed at ensuring the Olympic and Paralympic Games will be the "most innovative" ever and provide visiting fans with an experience they are unlikely to forget.

The project brings together experts in the field of robotics, and is supported by Japan's Cabinet Secretariat, the Ministry of Education, Culture, Sports, Science and Technology, the Ministry of Economy, Trade and Industry, the Tokyo Metropolitan Government, Panasonic, Toyota and Tokyo 2020.

Human Support Robot and Delivery Support Robot, developed by Toyota, will allow spectators to enjoy watching Tokyo 2020 in greater comfort, it is claimed.

The robots will provide assistance to fans in wheelchairs at the National Stadium by carrying food and other goods, guiding people to their seats, and providing event information.

Power assist suits developed by Panasonic will be used in the backstage areas of venues and at the Olympic and Paralympic Villages to unload and transport heavy objects, including food and drinks, and for waste disposal.

This will ease human workloads by "providing a healthier and safer working environment", it is claimed.

The suits will also be deployed at airports, loading incoming athletes' luggage onto buses.

Other robots will perform a number of additional duties during Tokyo 2020, details of which are due to be announced at a later date.

Overall, it is said that robot technology will help deliver a "safer and smoother" Games, and while the robots will be used only in specific roles during Tokyo 2020, the project is hoped to showcase their potential for wider application in everyday life.

"The Tokyo 2020 Games are a unique opportunity for us to display Japanese robot technology," Hirohisa Hirukawa, leader of the Tokyo 2020 Robot Project, said.

"This project will not simply be about exhibiting robots, but showcasing their practical real-life deployment helping people.

"So there will be not only sports at the Tokyo 2020 Games, but some cool robots at work to look forward to as well."

Masahiro Ido, executive officer of Panasonic, added: "As the first Paralympic Worldwide Partner in Japan, Panasonic aims to contribute to the success of the Tokyo 2020 Games through our solutions.

"We strongly believe that our robot technology, including power assist suits, which constitute one of our sponsorship contributions, will be of use to all people regardless of impairments, and to society in general, becoming a legacy for future generations."

Tokyo 2020 vice-director general Masaaki Komiya said the project is beginning with the help of many people in order to help realise a truly innovative Games, as stated in Tokyo 2020’s vision.

"I would like as many people as possible to experience these technologies, which are one of Japan's strengths, and I believe that through these we will be able to showcase a new style of the Games," he added.

In November of last year, Tokyo 2020 sports director Koji Murofushi revealed the possibilities of how artificial intelligence (AI) and robotics could help "revolutionise" the Olympics and Paralympics and also help Japanese society.

Murofushi, an Olympic gold medallist in hammer throw at Athens 2004, gave a short presentation to the IF Forum in Lausanne regarding the plans of Tokyo 2020 to use of AI and robotics during the Games.

It will be used at more than 40 venues, including the Main Press Centre and Athletes' Village.

Murofushi also revealed that the power assist suits created by Panasonic and used at the 2017 Para Powerlifting Japan Cup are set to appear again at Tokyo 2020.

They will be followed by the Paralympics, due to be held from August 25 to September 6.