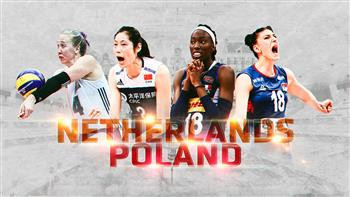 The Netherlands and Poland will jointly host the 2022 International Volleyball Federation (FIVB) Women's World Championship, it has been announced.

The FIVB made the announcement at the Polish Volleyball Federation's 90th anniversary celebrations in Warsaw.

Both The Netherlands and Poland have extensive experience in delivering world-class volleyball events and are said to have many thousands of volleyball-loving fans.

It is claimed that this will ensure an electric atmosphere for athletes in 2022.

"The FIVB is delighted to have found two great nations, famed for their love of sport and their ability to host world-class sporting events," FIVB President Ary Graça said.

"We conducted a very competitive bid process and unanimously decided that the joint bid of The Netherlands and Poland was the best bid for the 2022 FIVB Volleyball Women's World Championship.

"For The Netherlands and Poland to come together, we have two great volleyball countries connected by their passion for volleyball.

"We have no doubt that they will put on a great show in 2022, delivering the ultimate experience for athletes and providing the best entertainment for fans, inside and outside the venues."

Since reaching the semi-finals at the Rio 2016 Olympic Games, The Netherlands' women's team has been a perennial contender at major events.

Runners-up at the 2017 European Championships in Azerbaijan and Georgia, they went onto make the 2018 Volleyball Nations League Finals in Chinese city Nanjing, finishing joint fifth, and reached the semi-finals at last year's World Championship in Japan.

The FIVB says excitement for volleyball in Poland has reached "fever-pitch" after the men's national team won its second consecutive World Championship title in 2018 in Italy and Bulgaria.

The women's team will be hoping to emulate their male counterparts' success in just over three years'time when they take to the court as hosts.

Serbia beat Italy to win the FIVB Women's World Championship for the first time in their history in October.

The World Championship triumph followed on from a silver medal-winning performance at Rio 2016.

In the bronze medal match, reigning Olympic champions China ended the possibility of an all-European podium when they beat The Netherlands in three sets.